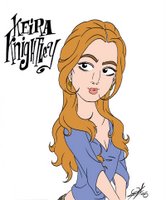 April's been a good month for me. I've had a couple profitable caricaturing gigs, and as of tomorrow, I'll be published for the second time this month. On May 1st (okay, so I'm a day off regarding this "April is so great" tirade. So sue me.), those in the mid Michigan area will be able to see the fruits of my most recent published labor in the pages of Interlude Magazine, a publication about the tri-cities (Saginaw, Bay City and Midland, respectively). I drew several cartoons illustrating a multi-page article about things to do in the tri-cities. Anyone interested in getting their hands on a copy of Interlude can find the magazine in Kroger grocery stores and most area bookstores and restaurants. As for me, I'm going to try to get my hands on some directly from the publisher. So check it out when you get a chance!

Also, for those who are wondering, while getting published in Interlude is very cool, it's not the BIG news that I eluded to in my last post. That bomb has yet to drop, but I surmise that I'll know one way or another sometime this week. So stay posted here until I give the word, eh?

And in keeping with the last handful of postings, here's a cartoon to share with you kids. It's a caricature I drew of actress Keira Knightley. I had it posted on this blog last week, but a glitch caused it (and the post it was attached to) to get deleted. At any rate, it's back, and I hope you enjoy it.
Posted by Unknown at 5:26 PM No comments: Links to this post 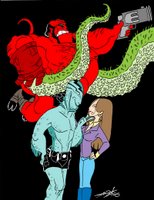 First off, my apologies to those of you who haven't been able to find Yenny #4 at your local comic shop, especially those of you who sought out issues at Coy's Comics in Saginaw, MI. As I think I mentioned earlier (or maybe I didn't...), Coy's was supposed to order ten copies for me, three for my pal Premo and five for the store to sell, which I was to sign. But a mix-up in shipping caused Coy's to only receive three issues, all of which I bought. They implied that they MIGHT get more in, but thus far I'm not sure that it's happened. I encourage you guys to check out www.aliasenterprises.com and see if you can order some issues directly from the publisher.

Next order of business: I'll be in Freeland, MI tonight at the Skyroom drawing caricatures for Merrill High School's prom from 6-11 pm. If anyone reading this happens to attend the event, I look forward to meeting you (or if someone I already know from Merrill is reading this, I look forward to seeing you again, at least!). Laura will be attending with me, and it should be a pretty nice event.

And finally, by the beginning of next week, I should have some BIG news to share, bigger even than my work in Yenny #4. News that may have a very positive effect in my career. I'll leave it at that for now until the cement hardens, so to speak. Until then, I'll be drawing odd shapes in the sidewalk for you guys to ponder until the path is ready to be walked upon.

I leave you now with a cartoon I drew of Hellboy and his two teammates, Abe Sapien and Liz (click on the image for full-size). If you don't know who Hellboy is, visit your local video store, or check out www.hellboy.com, the official site of the character and his creator, Mike Mignola.
Posted by Unknown at 9:23 AM 1 comment: Links to this post

Upcoming Caricature Gigs and other news

This Wednesday (April 19th to be precise) I'll be drawing caricatures at Northwood University here in Midland. It's rare that I have art jobs within close driving distance, and this one is about as close as I could ever hope for. It's always nice when I don't have to take a loss on how much gas I'll be burning on the drive over, since it's only about five minutes from my apartment.

On April 29th I'll be drawing caricatures for Merrill High School's prom, which will be held at the Skyroom in Freeland, MI (just a mere twenty minute drive from my place. Sweet!). They're providing Laura and I with dinner, which rocks, and it's not going to run terribly late, which also rocks. Nothing sucks worse than a gig that gets out at three in the morning and having a two hour drive home ahead of you.

The past couple weeks have seen a bit of an artistic phenomenon in my little world. I post a lot of my work on deviantart.com, an online art gallery. And one of my pieces, titled "The Last Happy Meal" and featuring the McDonaldland characters reinacting The Last Supper, has been chosen as a standout piece by the website's administrators. In less than two days the cartoon got over 3,000 hits, and positive comments came by the bushel. Only one negative comment stood out, but that one quickly got overwhelmed by an onslaught of MORE positive feedback. This was definitely my most well received work to date, which I'm posting here now.

So that's about it at this point. Stay tuned for future updates and more cartooning news than you can shake a stick at. Jeez, shake a stick at. What the hell does that mean, anyway?
Posted by Unknown at 6:33 PM 1 comment: Links to this post 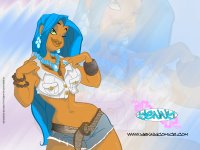 On a whim I stopped by Coy's Comics in Saginaw today, and to my surprise, Yenny #4 has finally been released! I grabbed three of the ten copies that I'd reserved (the other seven should be in next week) and walked out of the shop elated. It looks great, and you guys are gonna love it. Thanks for everyone's patience in waiting for the issue's unveiling, and let me know what you think of it when and if you get it for yourselves! P.S. I'm including a sample of Dave Alvarez's Yenny artwork so you can see how much this guy artistically rocks!
Posted by Unknown at 3:56 PM 1 comment: Links to this post 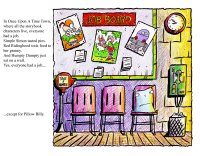 I figured now was as good a time as any to introduce you all to Pillow Billy, my children's book that's still in progress. I've included the first completed page of the book for you to see (again, click on the image to view it full-sized), which will hopefully give you the flavor of the book and a hint of what the completed work will be like. I'd like to point out that while the text is exactly as it will be read in the completed book, the font and layout of the text are not set in stone. At this point, I'm either going to have my friend Justin assist me by laying out the text in Quark (a page layout program) or I'll be lettering the book by hand to maintain the scratchy, messy, homemade quality of the book. On a related note, I hope you'll notice the dramatic change in art style that I've adopted for this piece. At any rate, let me know what you think.
Posted by Unknown at 9:40 AM 3 comments: Links to this post

Thanks to the efforts of Web, funk and Jedi master Foco, my blog has been updated with the capacity to post images. And you better believe I intend to use it, starting right now. For my first image-included post, I'm going to show you the two-page story that I wrote and drew for Yenny #4. Seeing as how Coy's Comics hasn't contacted me yet, I'm left to assume the comic hasn't been released yet. However, for those of you who've been waiting so patiently to finally see what all the hoohah is about, here ya go. Just click on the image to see it full-sized. Let me know what you think.
Posted by Unknown at 5:00 PM 1 comment: Links to this post

Essentially what the subject heading means is: will tomorrow, April 5th 2006, finally see the grand unveiling of Yenny #4 featuring my story and artwork and be the biggest unveiling since King Tut's tomb, or will it fail to be released on schedule yet once again and become the next biggest let down since Al Capone's Vault? Alias Comics website seems certain that Yenny will be reaching stores tomorrow. That's the best assurance I have on the subject. So what I suggest is check it out for yourselves. Call around. See if it's in. As for me, Coy's comics says they'll call me when my stash arrives. I've got ten issues set aside for myself, my pal Premo has one set aside, and there will be five issues set out on the shelves by Coy's management, all of which I will have personally signed. So if you want to get one of those issues, better perk up your ears and make headway to Coy's before all five are goner than gone.

On another note, if all goes according to plan (and as you can see with Yenny #4, it rarely does), this blog will have a new look sometime within the next week. Web(and funk)master Foco will be updating the format of this sweet baby, allowing me to post artwork and images. So if any of you out there happen to know Jeremy (and I know at least one of you does), make sure to give him a call and tell him to get on that, would ya? Thanks!
Posted by Unknown at 3:32 PM No comments: Links to this post