LIVE SKETCH SHOW RETURNS, AND A CALL FOR ASSISTANCE!!!

It's back like Billy Jack eating a Big Mac at the Love Shack! Catch my first new Live Sketch Show tonight at 8pm eastern time at this link. I'll be working on my Marvel Universe 2011 cards, so you can see my creative process (1.Think up weird idea 2. Draw it 3. Drink Diet Pepsi 4. Repeat).

I won't be taking suggestions for tonight's sketches, but you can still contact me during the show via Ustream's chat window! You need to log in to Ustream to use the window, but registering is easy. It only takes a username and an email address. Once you've entered that info, you can chat with me. Just like last always, I'll have loads of useless trivia and my own brand of quirky humor to inject (or infect) into each sketch I create!

On May 1st, an installment of my "Necronomicomics" will appear in the latest issue of Rue Morgue Magazine in the letters column! For now, this is a one-time appearance, so I encourage any of you who like to collect my work to buy a copy after that date. You can find it in any Barnes and Noble and Borders bookstore for sure, and probably any other major bookseller. But that's not where I need your help!

I'm starting an online campaign to get "Necronomicomics" into Rue Morgue as a regular feature, and I need YOU to send some e-mails! Check out the May 1st release of Rue Morgue and view my cartoon, or else you can view all my installments here, here, here and here. Then AFTER MAY 1ST, send the most glowing, persuasive, begging e-mail you can to the editor and the art director, telling them how much you dig "Necronomicomics", and how you want to see it as a regular feature! Sound like something you'd be interested in? I know I am! Here are the addresses you need to write to:

And in other news...

COMIC CONVENTIONS
I'd been asked to create artwork to promote actor Bruce Campbell's appearance at the Detroit Fanfare Comic Con this September. And just yesterday, after a great first week with my new computer, my Bruce Campbell art became the first complete piece that I created with my new PC (I color all my art using CS4)! I think it looks sweet as hell...but unfortunately, I can't show it to you guys right now. Fanfare wants to hold off on the big unveiling until the con rolls around. But I can tell you that the art features modern day Bruce, while referencing some of his past films, and will be used for sketch cards to be given out at Fanfare. Word has it the art may be used for some bigger promotion too, but we'll see when it gets closer to the show!
_____________________________

COMIC BOOKS
I just finished the final draft of the script for my first issue of "Bodie Troll", my new creator-owned all-ages comic book. It's been a whole lotta fun to write, and now I get to get my hands dirty with the really fun stuff--designing the look of the world! The main characters are just about designed, but the environments, supporting characters, even the style I draw it all in, it's all open to experiment. I can't wait to start! So more news as this continues to unfold!
____________________________________________

Well, that's all the news that's fit to blog! Hope to see you tonight on my show, and reeeaaalllyyy hope to have your help in my online campaign to make "Necronomicomics" a regular feature in Rue Morgue Magazine! See you soon!

Posted by Unknown at 10:05 AM 4 comments: Links to this post

Hey, everybody! My apologies to those of you who missed my reminder that last week's Live Sketch Show was on hiatus. I suspect you figured it out when I wasn't drawing live last Wednesday night!

Anyway, I'm back this week, and I'm changing things up a bit. There won't be a theme this time--instead, I'm going to showcase a project that I'm currently working on! I've been contracted to create sketch cards for the Marvel Universe 2011 set (released through Rittenhouse), so I'll be creating some of those cards during my show this Wednesday night, from 8-9:30 pm eastern time!  As always, you can catch the show at this link.

And if you want to chat with me during the show, you can contact me during the via Ustream's chat window! You need to log in to Ustream to use the window, but registering is easy. It only takes a username and an email address. Once you've entered that info, you can chat with me. Just like last always, I'll have loads of useless trivia and my own brand of quirky humor to inject (or infect) into each sketch I create!

Just to give the heads up, As of this week, I'm going to start broadcasting my show every other week for awhile. Work is piling up a bit, and doing this show every week kinda piles it higher sometimes. But I promise that I'll keep the show going for the foreseeable future, even if it's just every other week!

In other news, I just got a brand new Dell Inspiron Computer, and I love the hell out of it! It's much faster than my old one, with a big ol' 23" screen and some cool bells and whistles. Unfortunately, a couple of those bells and whistles have yet to be installed, specifically my new Photoshop program, which is partly why I haven't posted any images here. Hopefully after tomorrow, that will be remedied, and I'll have lots of new stuff to share!

Hope to see you guys Wednesday night! And if I miss you, have a good Easter!

NO SHOW, YET LOTS TO SHOW, Y'KNOW?

Happy "beginning of the week" everybody! I actually love the start of the week--it gives me hope that there's time aplenty to complete all the stuff I need to--and then Wednesday hits, and I realize I didn't accomplish nearly enough, and the week's half spent!

That, in part, is why I'm giving my Live Sketch Show the week off as of this Wednesday night (04/13/11). Too much to do, or try to do, as Friday approaches, and something had to give. Hopefully I'll be back next week with a new episode, and hopefully you'll be there, too!

In late 2010, I developed a single panel comic that lampooned horror films. I called it "Necronomicomics", and I've been shopping it around to several horror film magazines. Recently, I spoke with Rue Morgue Magazine's art director, who enjoyed my comic and is running one of them in their May issue! You can see samples of my "Necronomicomics" below! *WARNING! These comics are funny but gruesome--and a prior knowledge of classic horror films may help your appreciation and comprehension of them! 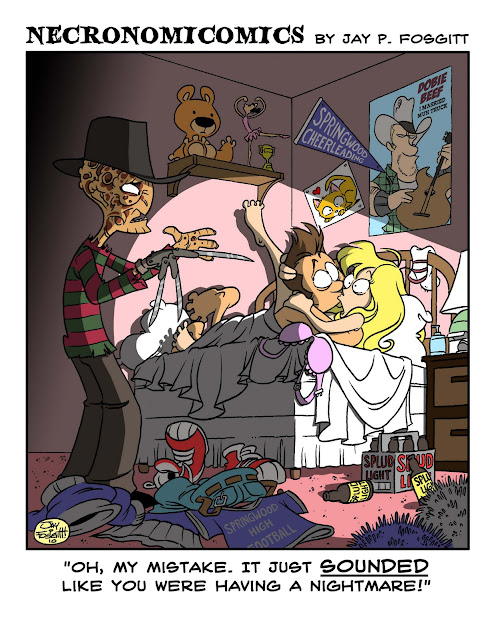 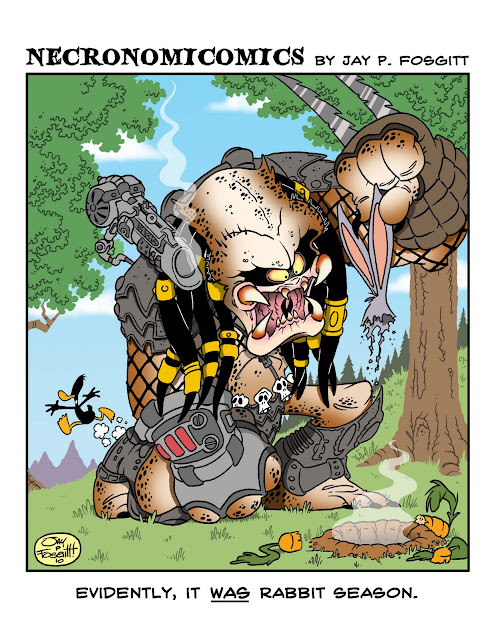 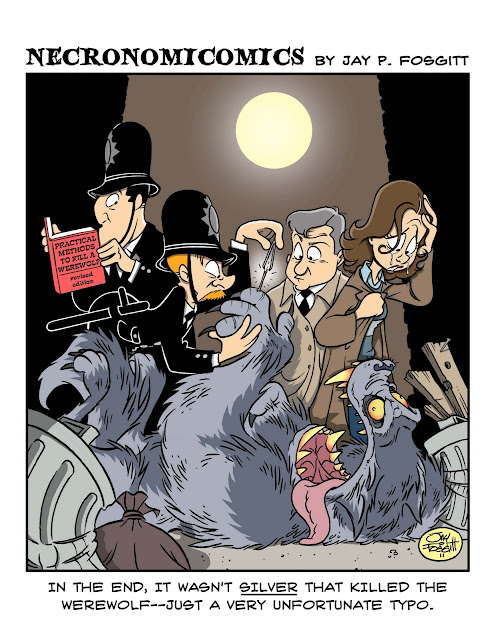 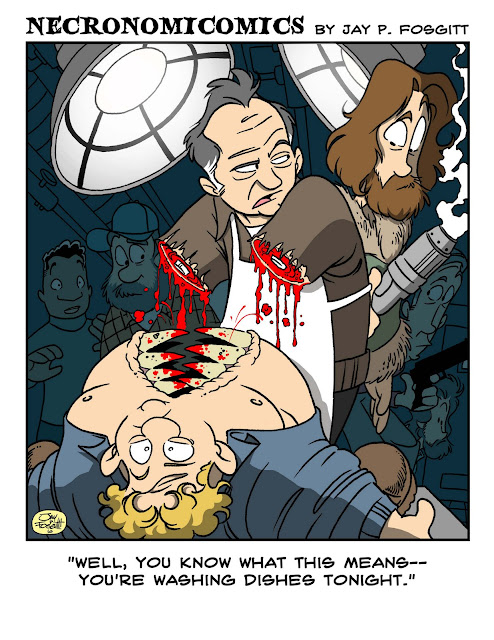 
I've been designing some new prints to sell at cons, and I'm very excited about the two that I produced this past week, which you can view below... 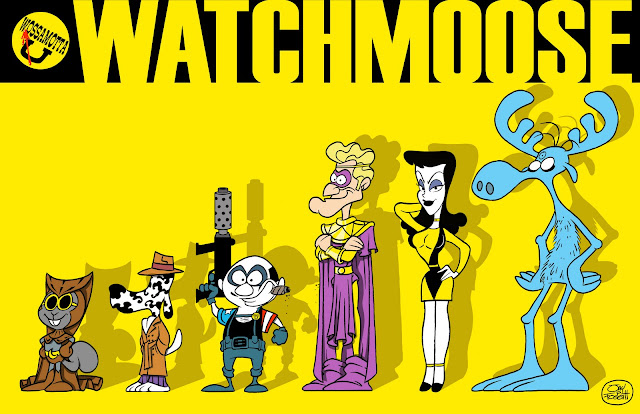 I honestly LOVE this piece. It's based off a design I drew five years ago, which you can view here. The original was fun, but drawn with minimal reference, and created before I had the digital coloring ability that I do now. I knew I could do better. This piece was drawn with both reference and reverence for Rocky and Bullwinkle and Watchmen, two institutions that are very special to me. It will be an 11 x 17 print, and should be for sale this summer! 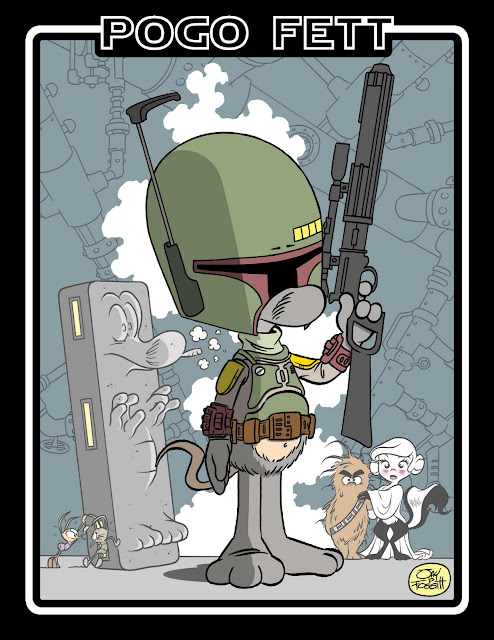 Some of you may recall this in it's original sketch form. At C2E2 last month, "Transylvania TV" mastermind Gordon Smuder challenged me to draw comic strip icon Pogo Possum as Star Wars Bounty Hunter Boba Fett. I loved the idea so much, and knew with more time and resources, I could make it into something really cool. So, I did! The concept of Albert the alligator frozen in carbonite carried over from my old sketch (the puffs of smoke coming from his frozen cigar are new). But the addition of Porky Pine as Chewbacca and Miz Mam'selle Hepzibah as Princess Leia were new sparks of inspiration. And yes, I realize that "Cinnamon Roll" hair Leia is from Star Wars: A New Hope, not The Empire Strikes Back. But it was easier to convey a skunk as Leia using the original look. Anyhow, this will be an 8 1/2 X 11 print. Grab one for yourself this summer!

So that's all the news for now! Catch you next week, both here on my blog and on my Live Sketch Show!

AND NOW, A WORD FROM OUR SPONSOR...

Once again, I'll be returning to taking suggestions live on the air--no advance suggestions required! I'll do my best to draw your ideas as accurately as I remember them, and will more likely create a Jay-filtered version of the commercial icons you recall from your youth!

Want to participate, or just chat during the show? Contact me during the show via Ustream's chat window! You need to log in to Ustream to use the window, but registering is easy. It only takes a username and an email address. Once you've entered that info, you can chat with me and suggest stuff for me to draw. Just like last week, I'll have loads of useless trivia and my own brand of quirky humor to inject (or infect) into each sketch I create!

So catch Jay P. Fosgitt's Live Sketch Show this (and every) Wednesday at 8 pm eastern time at THIS LINK. Hope to see you there!

--Jay
Posted by Unknown at 2:30 PM No comments: Links to this post