IF IT'S GOOD ENOUGH FOR OBAMA...

We know interrupt your regularly scheduled Internet surfing to bring you Jay P. Fosgitt's "State Of My Drawing Board Address". 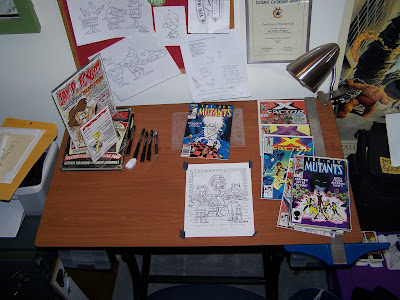 As you can see, its state is cluttered, yet vibrantly colored and frozen in the midst of creative output.
---The drawing in the center is a slightly adult backstage peek at Josie and the Pussycats--a commission from a fella who requested anonymity. Nothing to be ashamed of, in my view. Commissions like this force me to refine my anatomy drawing, and help pay the bills to boot. Plus, c'mon, drawing half dressed women ain't the worst way to spend an afternoon. I'm just sayin'.
---In the upper left corner is a book about the making of the Tarantino/Rondriguez double feature "Grindhouse". This was one of the coolest films I've seen in a decade, and it continues to inspire me. Sure, it has its detractors, like my friend Motz. But as he spends his days huffing stale record album covers, I'm apt to think his powers of perception have been damaged. Love ya, Motz!
---Also in the upper left corner atop the book are two signs I made for my table at the con. More on those later!
---And to the right is a stack of old back issues of "The New Mutants" and "X-Factor" comics that I recently bought at a comic and card shop in Ypsilanti. These books were two of my favorites as a kid, and finding these old issues was like unearthing a treasure chest of nostalgia.
So all these things have helped keep my imagination from flatlining as I try to dodge stress and exhaustion. And why would I be stressed and exhausted, you ask? Well….

With a week to go until Wizard World Chicago hits, I'm at risk of my inner needle going into the red of "panic mode". It's my first con appearance promoting Dead Duck (albeit three months before the book's being released), and I've been rushing to get my swag (or merch-- pick your own slang for "stuff I'm sellin'") ready for public consumption. 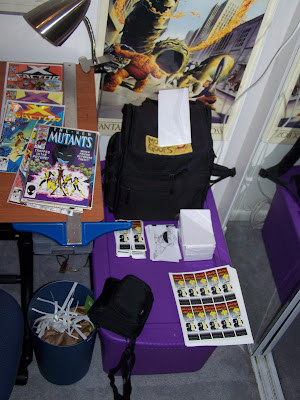 Much of what I'm producing for the con resides here on my big purple tub (otherwise used for holding anything I don't have room for on my drawing board).
--The stack of Dead Duck bookmarks that I've printed up can be seen in its cut and uncut forms. My most affordable item at the con, if you don't count the free buttons and four-page promo that my publisher is printing up (you can see the button design below). 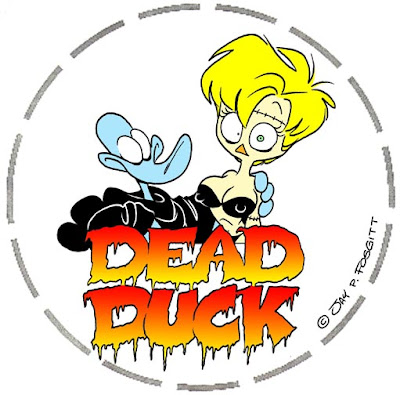 --You'll also see my gradually growing stack of "pocketoons", small drawings that I'm selling for a lower cost than some of my other works due to their size and lesser difficulty in creating. The trick has been to spend as little time as possible drawing these things so as to justify the low price tag. But when you're having fun creating something like this, you just lose all track of time spent.

Here's a close up of what the bookmarks look like. It's the same design I used for my big banner, but with the addition of my main online ports of harbor. And here's a close up of some of my pocketoons. As you can see, I'm trying to run the gamut of subjects to appeal to a wide audience. Though ultimately I don't draw anything that doesn't appeal to me personally, so hopefully con attendees will share my sensibilities.

In my mad dash to whip up anything eye catching and funky for my con table, Laura pointed me towards this cardboard skull during a recent trip to Michael's hobby shop. Its paper surface was perfect for decorating, so I bought it and made it into a 3-D ad for Dead Duck: 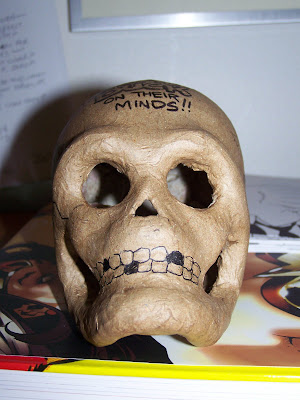 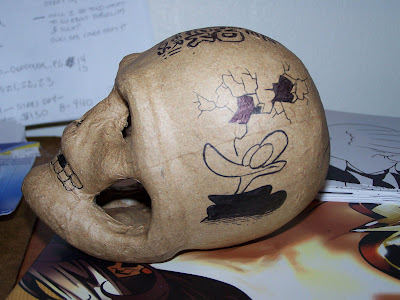 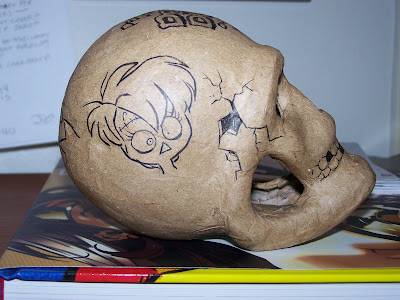 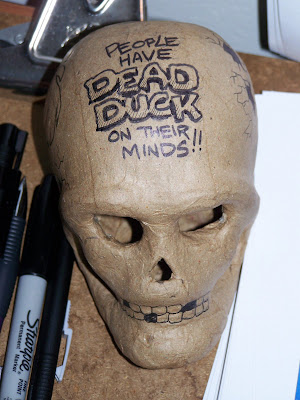 And speaking of ads for Dead Duck, the tagline I wrote on the skull actually came from another publicity venture I undertook just last month…. 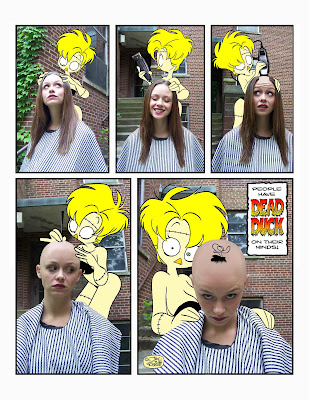 This was an idea for a Dead Duck ad that I've had for almost two years now. The model is a friend of Laura's, Sarah "Sid" Szydlowski. Sid is an actress and student at EMU and appeared with Laura in the play "Angels in America" last spring. From my years at CMU and my current connection to the acting talent at EMU via Laura, and can tell you that having creative people around you willing to participate in weird artistic ideas like this is invaluable to a cartoonist like me. And for those wondering, no, Sid didn’t really shave her head for the ad. I simulated it all in Photoshop, a tool that I've gradually taught myself to use in the past ten years. And looking at this finished piece, I can honestly say that I'm proud of what I've accomplished. The piece may see its public unveiling in Chicago, but if not, it'll surely pop up elsewhere as the graphic novel comes closer to its November release. 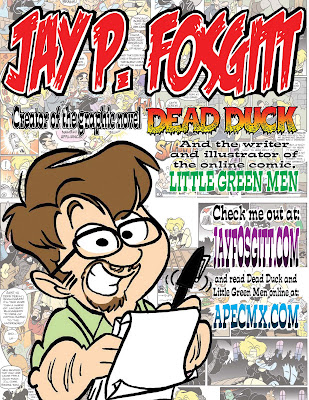 The "Jay sign" will be 8 1/2 X 11, and hopefully eye-catching enough to pull in con attendees to my table. 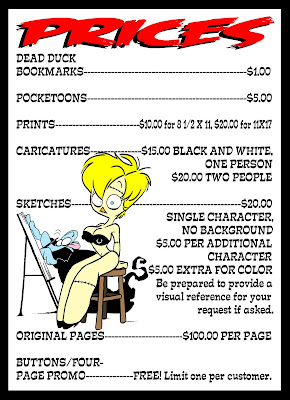 My price sign is tiny yet thorough. Feel free to take notes if you plan on attending Wizard World and want to commission me or buy something.

So that should get everyone up to speed on my creative endeavors. The countdown to the con continues, and I'll post here once more before we leave, just to remind you to be there and what's going down.

But now I want to step away from the drawing board and take you on a little photo journey called "How I spent my summer!" Living in Ann Arbor has had the benefit of having everything I want to do and see within it. Going on vacation is as simple as driving downtown, or walking a couple blocks in any direction, and I'm totally in love with it. 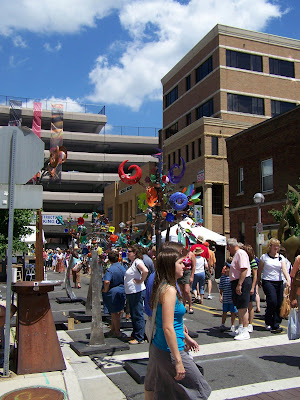 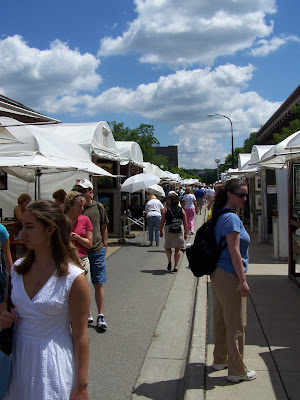 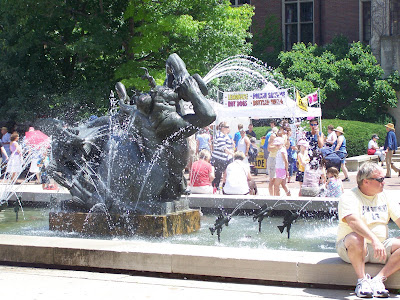 Here's a few photos from the Ann Arbor Art Fair. It was perfect weather the day we went, and it was a really great experience. I best part (and regretfully, the one area I didn't get to photograph) was the animation station, where I got to animate one of my characters. Only in Ann Arbor, I tells ya….

And here's some photos from the Arboretum, a park full of old growth trees and gardens. It's really inspiring to walk through there, and most of the photos I took were chosen because they reminded me of the Shire from Lord of the Rings (the fact that I'm short, hairy and have big feet is only a coincidence…maybe). 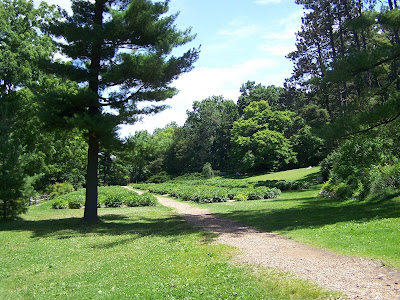 Here's Laura adding to the beauty of the flowers…. 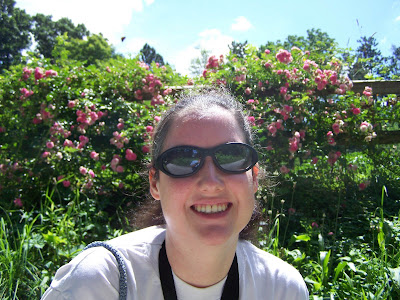 This picture made me think of Gandalf and a Bilbo talking at his birthday party. I'm a nerd, I know…. 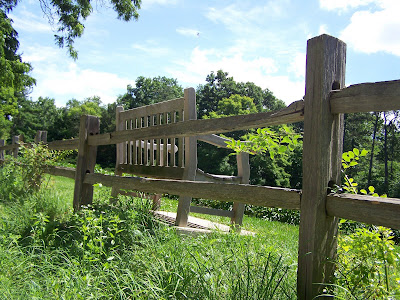 Now tell me this doesn't make you think of the hobbits being chased by the dark riders? C'MON!! 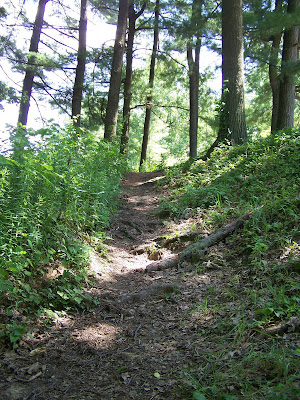 We've captured the wild Jay in his natural element. Careful you don't spook him. He's prone to hiss and wet himself. 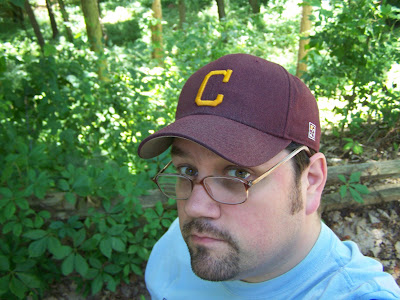 When you consider that the Arboretum is all of one block off from the city, seeing a fawn up close like this is really an amazing sight. It's mom and sibling were about two feet away from it. 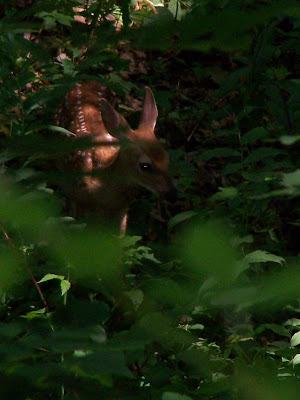 What can I say? I married a girl who digs Hobbits. 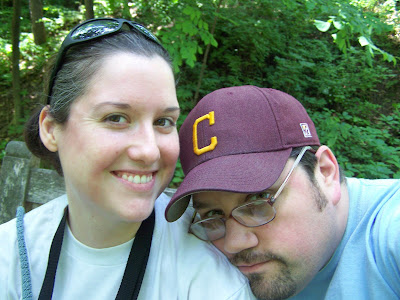 How about Laura atop this clunky old Earthen staircase? Kinda reminds you of something….I wonder what that could be…it has a ring to it…. 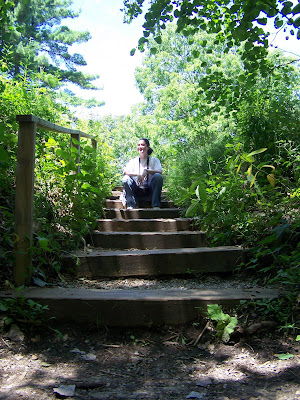 We also finally got a cat this summer. Her name is Goonie (Laura let me name her--my one claim to ownership), and she's the apple of Laura's eye. She also likes me okay, at least when Laura's not around to slather her with attention. 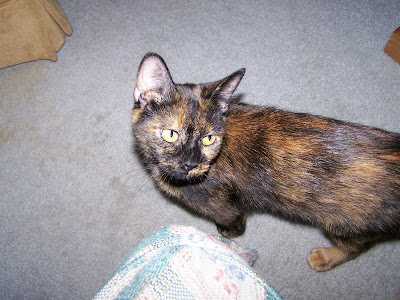 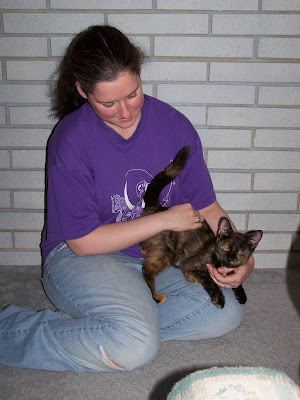 And lastly, here's Laura and I at her dad's in Auburn, MI around the 4th of July. That's my new hat that I bought this summer. I plan on rocking it throughout the year. 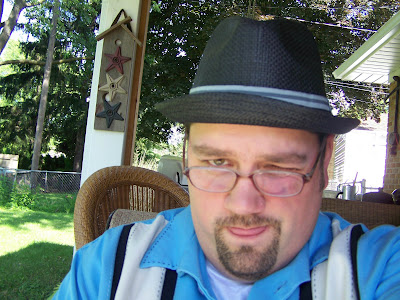 Don't know if I mentioned it, but I tend to take all the photos myself, which is why you always see me in such weird pos…OH LOOK! A SQUIRREL!!! 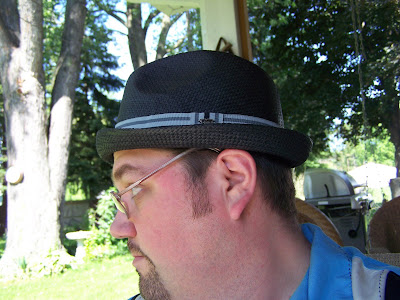 And here's dainty little Laura flanked by the big ol' lumpy bridge troll that is yours truly. 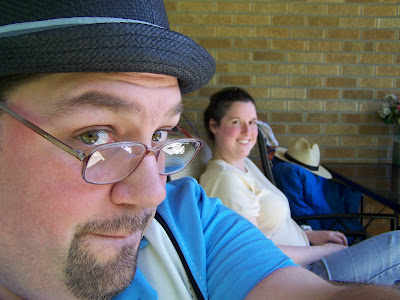 So that's it. Hope I've satisfied those of you hungry for a long and winding update, and hope I've effectively tranqued the rest of you into a blog coma, making the rest of your workday far livelier by comparison. Be sure to read my online Dead Duck comic as we get closer to the book's release in November. And the con countdown continues, and I'll be back once more before the 5th. Be here for the big send off!

San Diego Comic Con--the biggest, most important comic con in the world--lands this week…and I won't be there. However, MY first major comic con appearance happens in just a couple weeks at Wizard World Chicago (August 5th-9th), and I'm currently prepping for the journey. For your benefit, you can link to the info on the con HERE. 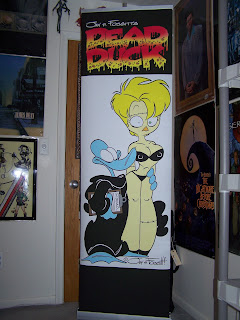 This is the banner I had made to promote Dead Duck. If you want to find me at Wizard World Chicago, this is the flag by which I stake my comic con claim (and unlike Columbus, I won't screw any indigenous tribes in the process). My table is #4008. Here's a run down of what I'll be selling there:

--Prints of Dead Duck and Zombie Chick, as well as prints of popular movies, cartoons and comic characters.
--Sketches of whatever you guys want--the previously mentions print subjects apply, as well as anything else you can think of.
--Original Dead Duck and Little Green Men pages.
--Pocketoons, tiny pre-made drawings that I'll have for sale.
--Caricatures of yourselves.
Prices are still being determined at this point, but they'll be noted when the con comes round.

In case I haven't mentioned it enough, the actual Dead Duck graphic novel doesn't come out until November. But I'll have plenty of preview material and other goodies at Wizard World to whet your appetite until then. So mark your calendars and plan on seeing me there! I know I do!