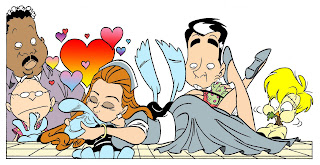 (A sneak peek from "A Minion Of Death Takes A Holiday", the final story in my Dead Duck graphic novel. Click on it for full view.)

It was August of 2007 that got the ball rolling. I met the editors of Ape Entertainment in Chicago, and began a months-long courtship that culminated with the signing of a contract in the early days of 2008. Dead Duck, my twenty-year-old brainchild, would finally be published.

As 2008 gained momentum, other cool stuff began to happen.

I met Lilo and Stitch creator Chris Sanders online, found him to be as much a fan of my work as I was of his, and brought him aboard to draw a pin-up of Zombie Chick for my Dead Duck graphic novel. (Oh, and he recently sent me some rough sketches of what the final piece will look like. I was in tears, friends. They were that beautiful. And those were just the rough sketches!)

I met syndicated cartoonist Dave Coverly, we became friends, and he opened up a world of opportunities for me. It is in large part because of him that I have that I've finally found my place as a professional cartoonist, and I'm the happiest I've been in my life since I first met my wife to be, Laura six years ago.

Laura took the initiative to apply to graduate school at Eastern Michigan, which forced us out of our stagnant little comfort zone in mid Michigan and into a bigger, scarier and by far more lucrative world. Her decision has been the biggest reason, in my mind, for my current success (and, it goes without saying, hers as well). I love Ann Arbor and I love Laura with all my heart.

In February, I'll be part of an exhibition of Michigan comics creators. I'll be displaying two original Dead Duck pages and two full color prints, to show my creative process. The exhibit will be held at Eastern Michigan, will becoming a traveling exhibit in the following months, and will include my friend Dave Coverly. I couldn't hope to be in better company.

Also in February, Ape Entertainment will be launching my online Dead Duck comic. It will appear once a week on their website, and will feature pages from the upcoming book, as well as original material and loads of surprises. More info on that in the next couple months to come.

And as has been reported continuously throughout 2008, November 2009 will finally see the release of DEAD DUCK, the graphic novel, in stores everywhere. I'm hoping to attend the Wizard World Con in August to do some promotion for it at the Ape booth, and I'll be doing a signing at the Vault of Midnight comic shop in Ann Arbor when the book is released. My friend and lawyer, Nick "Pro Bono"dono will be assisting me with press releases and P.R. stuff. And along with his friend Caleb, a talented man in Lansing broadcasting circles, we'll be filming a five-minute documentary about my creative process on Dead Duck, which will be screened during my signing at Vault of Midnight. And last but not least, I'm hoping to do a signing at Coy's Comics in old town Saginaw, which was my comic book buying mecca throughout my youth.

So there you have it, 2009. You've got a lot on your plate. Hope you can stomach it. If you can even tie 2008 in accomplishments I'll be impressed.

To the rest of you, thanks so much for sticking along for the ride. There's loads more to come, and I want you all there on the sidelines. Your friendship and loyalty has earned you a backstage pass to whatever comes next!

Happy New Year and so much love,