DEAD DUCK AND ZOMBIE CHICK: RISING FROM THE GRAVE--PREORDER!

After a seven year absence from comics, my undead duo has returned in "DEAD DUCK AND ZOMBIE CHICK: RISING FROM THE GRAVE!"--my new one shot comic published by Source Point Press!

Featuring three previously unpublished stories, a brand new adventure created just for this comic, never-before-seen artwork, pin ups by some amazing cartoonists, and an interview conducted by "Norah" writer Kasey Pierce, this is a rare treat for mature fans of my work with immature senses of humor (i.e. not for kids)!

And the best part is, you can order it NOW through Source Point Press' website! 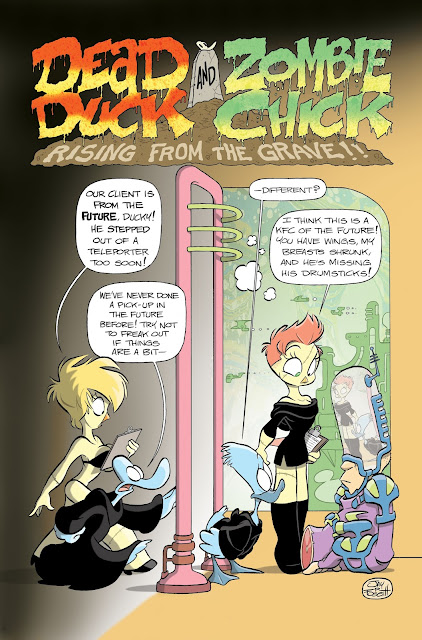 Posted by Unknown at 8:48 AM No comments: Links to this post

Just a reminder that March is Marvel Month for me, as the issue of AVENGERS STANDOFF: ASSAULT ON PLEASANT HILL that I drew the cover for comes out March 2nd! You'll have two opportunities to meet me and have a copy autographed here in Southeast Michigan--

From 10 am-1 pm, I'm appearing at Green Brain Comics in Dearborn, Michigan, and you can see the event page here.

Then from 3 pm-6 pm, I'm appearing at Comic City in Canton, Michigan, and you can see their event page here.

Hope to meet up with as many of you at these locations as possible! 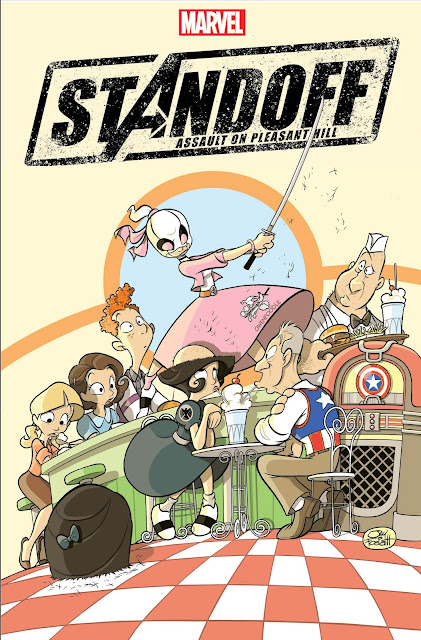 Posted by Unknown at 1:05 PM No comments: Links to this post

A year away and much to say...

So I sit here, just a bit more than a month shy of a year from the last time I posted on this blog. I probably would have gone longer, since I frequent other social media enough that my whereabouts and happenings are already pretty common knowledge. But, since I've updated my website for the first time in four years, I figured this site was due one, too (it is kind of the centerpiece of the website, after all).

A lot has happened in a year. I've been a fairly regular artist on the “My Little Pony” comics for IDW, with five issues currently under my belt since late 2014, and a new issue to begin in the next week or two.

“Bodie Troll”, my creator-owned comic that's been published through Red 5 Comics since 2013, released the first issue of its new mini series last May--”Bodie Troll: Fuzzy Memories”. At present, there is a delay in releasing the second issue due to internal happenings at Red 5. But the issue is completed, and one way or another, it will see print, along with more Bodie comics to come.

The “Sesame Street” comic that I contributed writing and art to in 2013 finally released its second issue around Halloween of this past year, with a cover I drew. The neatest part was that it was unveiled on the Halloween episode of The Rachael Ray Show”, with her holding up my cover in full view of the TV audience as Snuffy himself stood behind her!

Just before Christmas, I was hired by Marvel Comic to draw a cover for an Avengers mini series called “Standoff: Assault On Pleasant Hill.” At present, there is discussion about further Marvel projects, but nothing solid yet to report.

In the past year, I hit a personal record number of comic cons, traveling to Seattle, New York, San Diego, Toronto, Chicago, and many others in closer driving distance. I'm returning to some of them this year, and adding some brand new ones that I'm very excited about. Be sure to check out my complete convention listing for 2016 at the bottom of my website's main page (jayfosgitt.com), which will undoubtedly add more after this blog is posted.

Speaking of Chicago, I'm premiering a new but familiar comic at C2E2 in March. I've partnered with Source Point Press to release a one shot comic, “DEAD DUCK AND ZOMBIE CHICK: RISING FROM THE GRAVE”. It's exciting to return to the characters that started my career in comics, while allowing me to recharge my creative batteries until I start back to work on “Bodie Troll”.

Besides my career in comics (or kind of related to it), I am also making time to write an ongoing column for Bump and Hustle, an online magazine dedicated to pop culture and family. My friend Kat Inokai is B&H's Editor in Chief and publisher, and she is also serving as my rep for my Canadian appearances. We're starting things off in a fun way with The Valentoon's Family Geek Boutique in Toronto, which Kat is putting together and I'm a featured guest at. Visit thebumpandhustle.com for info on when and where the event will be held, and how you can order a commission from me to be picked up at the event!

My other sideline is serving as co-host of the Get Your Geek On podcast, an online show where we talk about the latest nerd culture topics with a little bit of knowledge, a whole lot of passion, and no shortage of goofball antics!

There's going to be a lot more to report in the coming months, and I look forward to sharing it as I experience it. Thanks for checking back, and be sure to visit mywebsite's links section for a list of all social media that you can follow me on!


Posted by Unknown at 10:10 PM No comments: Links to this post