It's been a real teeter totter ride for me lately. From the ups of moving to such a great town as Ann Arbor, to the downs of my inability to find steady employment with my art. And now, just as I may have landed a steady gig caricaturing down here, the teeter totter drops hard.

One of my oldest heroes (in his age and mine), Bill Melendez, has just passed away. Melendez was the man responsible for bringing Charlie Brown and the Peanuts gang off the comics page and onto the TV and movie screen.

In many ways, Bill was a greater influence on my art than Charles Schulz. I'd discovered Peanuts as a kid reading the comic on my grandma's dining room floor. But it wasn't until I saw them move, talk and breathe life to the brilliant jazz music of Vince Guaraldi that I really experienced what they were truly about. Whereas Schulz often dealt with the hopelessness and futility of life (which is where he claimed was his wellspring of humor), Bill instilled the Peanuts' world with hope, love, individuality, and still found humor in the success of all that.

The Snoopy I knew wasn't the one whose thought bubbles narrated the adventures of The WWI Flying Ace and his Sopwith Camel. The Snoopy I knew never spoke a word, save for the hilarious grunts, bleets and mish-mash mumblings uttered by Bill himself in every Peanuts cartoon he directed or produced. Bill gave Peanuts a third dimension, not just physically but emotionally. I still cry whenever I watch "A Boy Named Charlie Brown," the first theatrically released Peanuts feature, eloquently and ingeniously directed by Bill.

I've been lamenting lately that all my heroes are dead. Were it not for meeting great men of my profession like Dave Coverly, Greg Evans and Sergio Aaragones, that would be truer than ever. But with the loss of Bill, I feel like I've lost the most significant hero to my spirit since Schulz and Jim Henson.

I know this isn't an elegant eulogy. Oftentimes the most elegant ones written are about a person the writer barely know, so he could distance himself from the subject and spend more time on flowery dialogue and sounding important and informed. But Bill was the last of my childhood heroes, and in the top three of importance. I can't replace him and I can't forget him. So I can't write anything eloquent. In my heart I knew him too well. But god, I really am going to miss him, and it will haunt me that I never got to meet him to tell him how special he was to me and what I do in life. 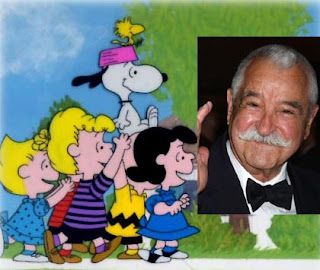 Posted by Unknown at 2:39 PM 2 comments: Links to this post