THE BLOSSOMING OF BODIE


It's really, really hard for me to contain my excitement about "Bodie Troll". It's like I can hear the inner workings of my comic creation clicking and whirring, and with each tick of a figurative sprocket, another fan letter arrives, another comic shop tells me they've sold out of issue #1, tells me they sold out again, another positive review pops up online, and Bodie's popularity continues to grow. The clockwork mechanism performs its function, spreading the corners of my mouth into a grin I that I couldn't release even if I wanted to.

For now, Red 5 Comics is keeping a cool head. "We are feeling very good about it" is as specific as they get towards Bodie's perceived success. But it speaks volumes. And I'd much rather have subtle expressions of optimism than a brass marching band banging out overblown and exaggerated sounds of triumph. Don't speak too soon, don't count your chickens before they hatch, it ain't over 'til it's over. I believe in all of that. But deep down, I know Bodie is making a splash, and I know Red 5 feels it, too.

Bodie Troll #1 is indeed selling out in comic shops across the country, and in some cases, across the globe ( a fan letter from Australia alerted me to that). Chalk it up to shop owners buying smaller quantities of a book from a creator few have heard of, but also count on folks who bought on speculation, fell in love with Bodie, told their friends, and copies began flying off the shelves. That's what I'm hearing in the fan letters I'm receiving, and the personal encounters I've had at comic conventions. "The cover looked cute, so I gave it a shot. Now I love Bodie, and can't wait to share this with my kids." That's becoming a mantra among my readers, and it warms my heart like nothing I've ever experienced before.

I've always wanted, but never really had, a strong female readership prior to Bodie. Now women and girls make up a substantial percentage of my audience. Kids have typically been polarized by my past comics work--they'd be attracted to the cartoon art, but their parents were repelled by my more mature content. But Bodie is anything but mature, and has become a comic that they can enjoy, laugh at, copy off of in their own youthful cartooning attempts--all a first for me. And men, historically my main reading audience, their reactions have completely blindsided me. They used to read my comics for the bawdy gags and sexy "wimmen folk" found within. But there's none of that in Bodie (well, a few innocent gags about bodily functions, perhaps). I worried the sweet, innocent humor and characterizations of Bodie would lose me their readership. Instead, it's strengthened it. Grown men--sports fans, car-enthusiasts, all machismo and testosterone--are dropping their guards and allowing themselves to be wide-eyed kids again, with that old, familiar taste for fantasy and silliness and a firm and an unflinching belief in the impossible. It's Peter Pan syndrome in the best possible way. Bodie is giving that back to them, if just for the 26 page time span of one of his adventures. It's the greatest gift I can give my readers. And their enjoyment is the greatest gift they can give me. And man, are they generous.

As I type this, Bodie Troll #2 is uploading to Red 5's server. It's slated for a June 19th release, and I'm already planning some signings at comic shops in Michigan and Illinois. I had my big reveal of Bodie #1 at the C2E2 con in Chicago this past weekend, and the reception Bodie received was better than the best I could hope for. Two moments in particular stood out for me, and I've captured them both here: 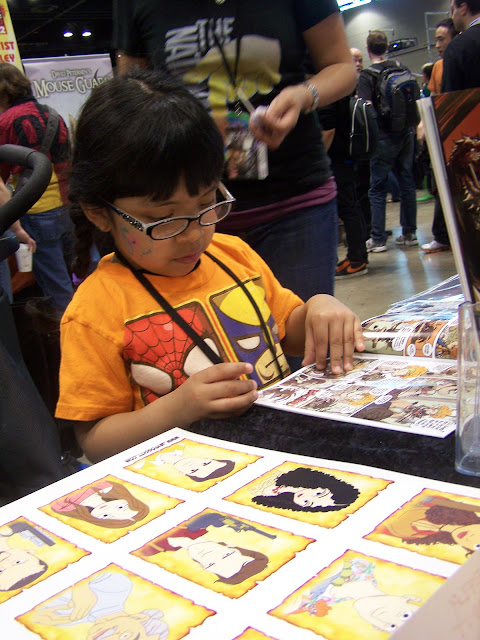 This little girl is Olivia. She just wandered up to my table and began pouring over one of my Bodie issues. I didn't need to sell her on the idea. I didn't need to say a word. Something about the fuzzy little guy just drew her in, with no help from me. Then she started asking me all the right questions that an inquisitive four year old could about my character--why he wanted to be scary and why he wasn't, why I said he was tiny but he looked so big on my convention banner, why the squirrel on the cover of issue #1 wasn't scared of him--it was all pure gold. This was precisely what I wanted--little kids--little girls--enjoying Bodie Troll. Olivia's mom asked her if she wanted a copy, and she enthusiastically said yes. The first photo was secretly snapped when she was reading, but the second was after the book became hers. 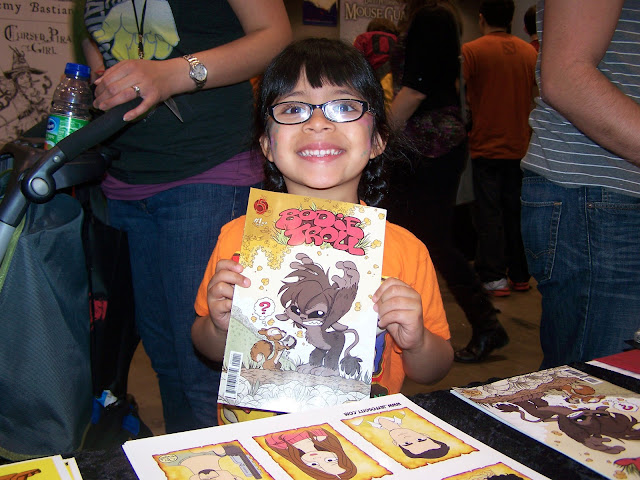 The second moment was encountering Rena Newman, a fan I'd met a year ago at another Chicago Con (one which shall not be named, but suffice to say it rhymes with Lizard World and I'll never go back there again). This fan was one of the bright spots of my time spent at that show, so seeing her at C2E2 made me smile. 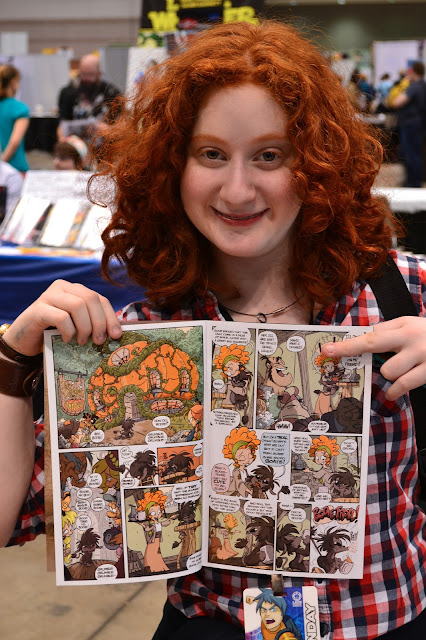 Upon seeing Bodie, she burst with enthusiasm about how cute he was (I've seen plenty of women and no shortage of men do the same thing). And when she saw Cholly and realized the resemblance she shared with Bodie's barmaid-best friend, Rena went berserk with glee. My pal and fellow comic creator Jay Jacot snapped this pic of Rena holding her copy open to a particularly Cholly-centric page. This photo is running in the back of issue #2, and will start off a Cholly lookalike contest that winds up in issue #4.

In the immediate future, you can find me this weekend at Green Brain Comics in Dearborn, MI, where I'm bringing Bodie for Free Comic Book Day. My fellow artists Joe Foo, Jay Jacot, Jeremy Bastian, Jim Anderson and David Petersen will also be there, all of us signing, selling and smiling with our fellow comic fans.

The weekend of May 17th, I'll be sharing a table at The Motor City Comic Con with Joe Foo, with plenty of copies of Bodie #1 on hand. As stores are all but sold out, my personal stash will be much sought after by Bodie junkies. So be sure to score your fix this weekend, or at Motor City on May 17th-19th!

That does it for Bodie for now. My other comic property, "Dead Duck", is running through its last story right now, with part 9 online as of this posting. For those who have faithfully followed my comic for all these years, this installment finally reveals Zombie Chick's origin, so you do NOT want to miss it!

Thanks for your time, folks! Keep on reading and talk to you soon!