My apologies to anyone who's been waiting around my blog for me to update it. Life and deadlines have been getting in the way. Rest assured, everything is going great with BODIE TROLL. Issue #2 came out the last week of June, and it's already selling out. I just turned in issue #3, set for an August release, and I'm writing issue #4 right now.


Outside of Bodie, I wanted to report on something very, very special that happened to me. In the early hours of July 4th, I received an unexpected e-mail from Karen Falk, archivist for The Jim Henson company, and the woman responsible for every major book on Jim's life and works produced in the past decade. Here's what it said:

I was doing some research in our archives and came across the fan letter you wrote to Jim Henson when you were 11. He was very encouraging in his response so I Googled you to see if you went on to become an artist – and indeed you did. Congratulations on what appears to be a successful career. Thought you’d like to see a copy of your letter and Jim’s response (attached).

This was the most unexpected and joyful news I'd ever heard. I had indeed written Jim Henson when I was eleven, in January of 1986, and sent him a birthday card for Kermit, who along with the Muppets had just turned 30. A month later, Jim wrote me back. Not a form letter, and not a stamped signature, but a typed letter, signed with a green felt tipped pen. That letter meant the world to me. So when I lost that letter a year or so after Jim died, I was devastated. Twenty-some years of regret, having lost my hero, and then losing one my genuine connection to him--all erased with a simple e-mail that I never, in my wildest imaginings, expected to receive. Here are the scans of my letter to Jim, and Jim's letter to me, courtesy of Karen Falk (click on images to enlarge): 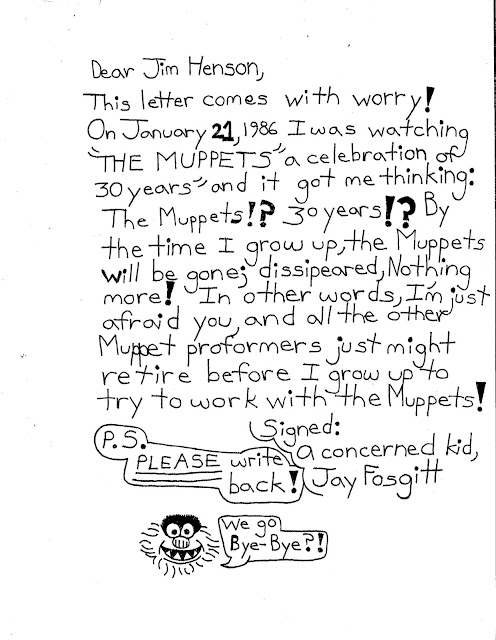 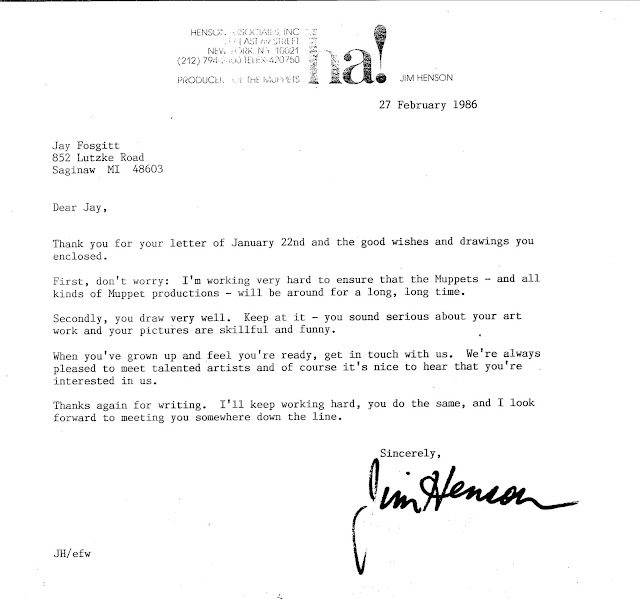 Needless to say, Karen Falk received a glowing message of appreciation from me, and a signed copy of Bodie Troll #1 will find its way to her in the coming week.

Now, those who know me and my work know how Jim has always been my hero, and my work (particularly Bodie) is very reflective of Jim's creative influence. So getting this letter back...man...it's like being reunited with a long lost and beloved relative. And it couldn't have happened at a more desperate time in my life, when I feel like I need Jim the most. I'm not religious, but who knows...maybe he's been watching me and my work all this time. The serendipitous arrival of Karen's e-mail is hard to ignore.

Thanks for listening. And for anyone in my past who doubted me when I said Jim Henson wrote me a letter...well, "told ya so" seems pointless. I probably quit talking to you people years ago. =0)