My drawings have been fleeced, and that ain't bad!

I had actually planned on doing a new Live Sketch show tonight, but was just reminded by my wife, Laura, that I have two out of town caricaturing gigs tomorrow and won't be back in town until late at night. So unfortunately, no show this week. I'll post something soon about making up for it next week with something special--a theme for the show that would have more audience involvement than ever before!

THE ZOMBIE APOCALYPSE IS COMING...AND IT'S ADORABLE

Last winter, I drew up a design for a zombie puppet. I contacted my friend Gordon Smuder (creator of the awesome online puppet show "Transylvania Television"), and we agreed to swap artworks, whereby I'd draw some cartoons for his show's website, and he'd use his puppet building skills to bring my zombie to life (or un-life)!

It's now seven months later. The soil's been broken, screams have been heard in the distance, and the stench of messily gnawed flesh wafts across the mist. Comprised, these elements can amount to only one horrific conclusion...

ABNER CADAVER HAS RISEN FROM THE GRAVE!!! 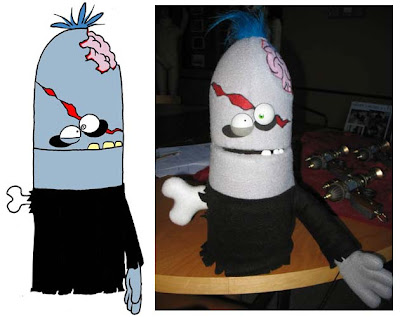 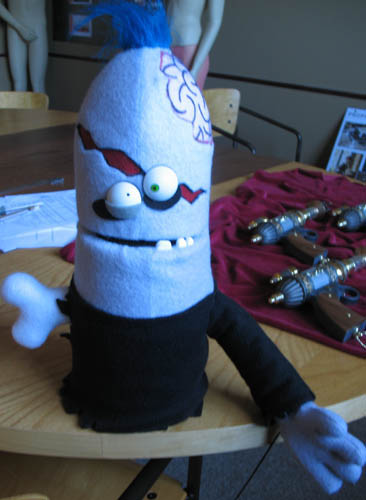 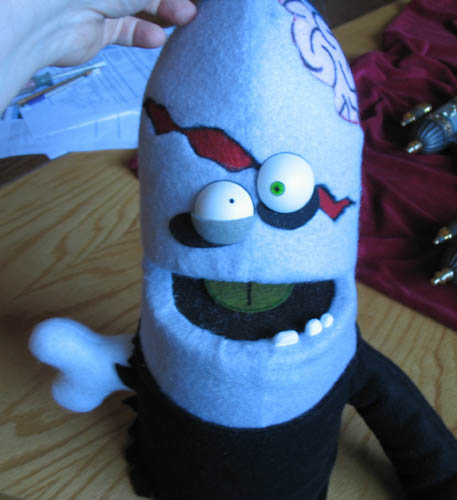 As you can see from my original drawing, Gordon was exceedingly faithful to my design, and gave me Henson-level awesomeness in a fuzzy little package! I'll be unveiling Abner in the decayed flesh at Wizard World Chicago in August, where the little guy will help promote my new horror cartoon, "Necronomicomics"! So huge thanks to Gordon for all his hard work. Having my designs turned into a puppet of this quality has been a lifelong dream, and I'm forever indebted to Gordon's skills!

And speaking of my new cartoon...


NECRONOMICOMICS
My cartoon's first official appearance in Rue Morgue Magazine will happen in issue #114, which lands the week of August 1st! As I always stress, buy the crap out of this magazine, then report back to the powers that be at Rue Morgue and tell 'em you LOVE Necronomicomics (good lord, I'm recruiting a cult)! The new goal is to get 'em to let me draw a cover for an upcoming issue! So supporting my work and the magazine is a step in the right direction!

WIZARD WORLD CHICAGO
As I mentioned earlier, I'll have a table at Wizard World on August 11th-14th selling copies of Dead Duck, and copies of my 2011 sketchbook. I will also be selling original artwork and comic pages, original sketch covers, some brand new prints that will premiere at this con, and I'll be taking commissions at the con! Click here to visit the website and find out more! Hope to see you there!

That's about it for this entry. Thanks for reading, and keep checking back for more news to come!

I'M NOMINATED FOR AN AWARD! SUH-WEEEEET!!!

Hey kids! I've just been told that I've been nominated for an award for my sketch card work on Rittenhouse's Marvel: Dangerous Divas set! I'm up for a couple different categories, which is pretty cool! Anyone reading this who might have the inclination to cast a vote on my behalf, hey, I wouldn't stop you! You can vote by visiting this link and following the instructions. Thanks in advance, and thanks to Rittenhouse for nominating me!

Not sure if it's even worth mentioning, but my Live Sketch Show is off this week. I question mentioning this because my viewership seems to be dwindling on the weeks I DO broadcast my show. This could be due to my switching the show to every other week, rather than the every week schedule I maintained at the beginning. Or maybe I'm not giving people what they want to see. Or it could be that folks just have better things top do. Whatever the reason, I'm contemplating stopping the show altogether. I can watch myself draw without broadcasting it. I started this show to connect with fans, and hopefully accumulate some new ones, and that's not happening if I'm my own audience. Now, this isn't a lame attempt to guilt anyone into watching. This is an honest effort to poll some folks and see if this is worth continuing. If you watch my show, plan on watching my show, or have some ideas for stuff you'd like to see on my show, either write me here, or at my Facebook page, or at fourpanelhero@hotmail.com. I'll run one more show next Wednesday, July 13th. If I don't get some responses by then, I'll give the show a decent burial and call it a day. So, lemme know what you think, folks. Or don't. That'll give me an idea of what you think, too.

In other news, I just sent off my latest edition of Necronomicomics to Rue Morgue Magazine. It'll be in issue #114, which comes out Agust 1st. Check for it then, buy the crap out of it, and be sure to write Rue Morgue and tell 'em you dig it so.

Lastly, a commercial for my commissions. Work has slowed down a tad from the past few months of reckless art gigs and assignments. This wouldn't be a problem, except that I've had two major and unforeseen expenses drop in my lap over the past month, to the tune of two grand. This was cash that was supposed to carry me through the con season. Now it's a crater in my bank account. So I'm outright asking that anyone who may have had an inkling to hire me for whatever reason--caricature for a friend, drawing of your favorite comic character in my style, whatever--now is the time to book me. You can contact me at: fourpanelhero@hotmail.com and I'll make your project happen.

And if you've been wanting to get an autographed book from me but haven't found me at a con, now's the time. I'm selling a limited amount of copies of Dead Duck for $30, which will cover shipping, and will include and autograph and original sketch on the inside cover. I also have copies of my sketchbook which I'm selling for $20, and will also include an autograph and sketch on the front cover. I accept Paypal and can ship within a week of payment. E-mail me if you're interested.

That's about it this week, kids. Sorry if I sound desperate. It happens to the best of us.