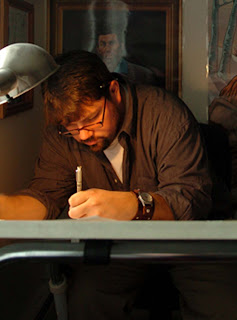 For anyone still interested in attending the Michigan Comics gallery exhibition that I'm participating in, here's the information for one last time. It opens this Tuesday, and several cartoonists will be in attendance for the reception, as well as the panel discussion afterwards, which I’ll be a part of. So read the info below, and come if you can!

Oh, and for those who can't make it, I'll actually be in another gallery show in Ann Arbor this April, which I'll post about next week. So don't say I never gave you a chance to catch my work in a gallery!

PRESS RELEASE FOR MICHIGAN COMICS: MIRTH, MOCKERY AND MAYHEM
March 31-June 5, University Gallery
Opening Reception: Tuesday, March 31, 5-7 pm
Panel Discussion: March 31, 7-8:30 pm, Student Center Ballroom B
Michigan artists and writers have created a significant body of cartoons and comics that is distinctive for its quality, inventiveness and variety, yet as a group they have received little attention before this exhibition. “Michigan Comics: Mirth, Mockery and Mayhem,” opening on March 31, 2009, in University Gallery on the campus of Eastern Michigan University, provides an excellent introduction to the works of about forty contemporary cartoon and comics creators who have their roots in Michigan. The exhibition, comprised of original art for editorial cartoons, gag panels, comic strips, comic books, graphic novels and other works on paper, focuses on artworks by native Michiganders and artists who have worked or continue to work in this state.
The fourth show devoted to original cartoon and comic art at Eastern Michigan University since 2001, the exhibition is curated by Richard Rubenfeld, Professor of Art at Eastern, and Dave Coverly, creator and artist of the syndicated panel, Speed Bump. Responding to the quality and diversity of Michigan cartoons and comics, they invited artists who come from and reside in many different areas in Michigan. Building upon the considerable accomplishments of early luminaries in the field, including Winsor McCay and John “Ding” Darling, and the unwavering popularity of works by such Michiganders as Cathy Guisewite (Cathy) and Richard Guindon (The Carp Chronicles), today’s creators are able to explore a broader range of themes and styles and can choose to work in media and formats that were unavailable until the late twentieth century.
Among the highlights of the exhibition are editorial cartoons by Mike Thompson (Detroit Free Press) and Larry Wright (Detroit News), and gag panels by Patrick Hardin, Tom Prisk and Harley Schwadron. Veteran comic strip creators, Jerry Dumas (Sam and Silo) and Jef Mallett (Frazz) are represented in the show as are comic book artists, Vince Locke, Bill Messner-Loebs and Mike Vosburg. Graphic novels are represented by artworks by Jeffrey Brown, Jay Fosgitt, Phoebe Gloeckner, and Paul Sizer, as well as by EMU alumni, Jane Irwin (Clockwork Game) , David Petersen (Mouse Guard) and Jesse Rubenfeld (Into the Dust). Classic underground comic book covers by Carl Lundgren, enchanting book illustrations by Laurie Keller, and painted murals of the Marvel and DC superheroes by Greg Hildebrandt are certain to generate discussion among visitors to the show.
In conjunction with the exhibition, a panel discussion of cartoon and comic professionals is scheduled for the evening of March 31st in Student Center Ballroom B. Moderated by Richard Rubenfeld, the panel includes his co-curator, Dave Coverly, as well as comic book artist, Katie Cook, and graphic novelists, Jay Fosgitt, Jane Irwin, and Paul Sizer. The exhibition and panel discussion are free and open to the public.
For additional information, please call Larry Newhouse, Gallery Director, at (734) 487-0465 or write him at larry.newhouse@emich.edu, or phone Richard Rubenfeld at (734) 487-1268 or contact him at richard.rubenfeld@emich.edu.
Posted by Unknown at 10:25 AM 8 comments: Links to this post

DEAD DUCK HAS LEFT THE BUILDING!!!

After a lengthy eighteen-hour period of downloading all 146 pages (plus cover) of the Dead Duck graphic novel onto Ape Entertainment's server, at 7:00 am on this Friday, March 20th, the first day of spring, I can report that Dead Duck has made a successful journey to my publisher. And as March 20th was the exact deadline posed for Dead Duck, I'm proud to say that I've delivered my first published comic book work on schedule!

Now, most of you guys reading this know me pretty well. You know I believe in fate, and that I believe wholeheartedly in symbols and signs. Well, I received a message from a fan this morning, pointing me to a recently released product that I've desired for many, many years but never thought would be made available to the public. Seeing the signs as clear as day, I jumped in my car and headed off to purchase a symbol of my destiny. 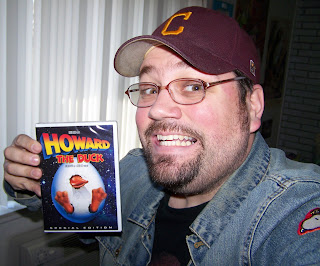 Yes friends, Howard the Duck has been released on DVD, and now I own it! I don't care what the movie going public has to say about this flick. I loved it when I was twelve and saw repeat viewings of it in the theater while devouring back issues of the original comic book. And I still love it today. Howard the Duck is easily the biggest influence on Dead Duck EVER. It ignited my passion for cartoon ducks and made me want to create my own.

The fact that I discovered the release of this DVD today, the exact day that I turned in the full three years worth of work I did on Dead Duck to my publisher, is a glowing beacon, a sign that this is what I was meant to do, that I'm on the path I'm supposed to be on, and that Dead Duck will be a success. Yes, I got all that from a DVD. I don't criticize your signs. The fact that today's the first day of spring is also symbolic; the birth of great things to come. I believe that sums up Dead Duck aptly.

And speaking of great things to come, the Michigan Comics Exhibition I'm participating in happens next week. I'll try and take pictures at the event and post them here.

Well, thanks for sticking with me, kids! More news to come, more symbols to view, and more success on the horizon…

ONE LAST TOUCH OF GRACE BEFORE DEADLINE….

My friends, this is it. Five days from now, I will be turning in the completed package of Dead Duck pages to my publisher. Seventeen years of conceptualizing Dead Duck and his world, and three years of hard work in creating the book, finding a publisher and taking care of all related odds and ends. And now, at the zero hour, just as I'm putting the final spit polish on my life's work, one last touch of grace settles gently upon my creation.

Doug Jones, the brilliant actor who portrayed Billy Butcherson in "Hocus Pocus", Abe Sapien, Death and the Chamberlain in the Hellboy films and Faun and Pale Man in Pan's Labyrinth, has written the most beautiful foreword for Dead Duck.

I had attempted to contact Doug a month or so back, figuring my odds of reaching him, let alone obtaining his involvement, were unlikely. After some time had passed, I read that Doug would be attending The Motor City Comic Con in May. I took this as a sign that I needed to try again. This time I included with my request a cartoon of Doug meeting Dead Duck and Zombie Chick. I have to think that's what initially got his attention.

Not long thereafter I received the nicest e-mail I've probably ever received from anyone. It was Doug, apologizing for the delay in his response (which he needn't have apologized for), complimenting my work and enthusiastically agreeing to write the foreword. Now, keep in mind that Doug's a very busy guy. And as he corresponded with me, he was away in Paris making a movie. So that he took the time to write me back at all was amazing. But that he agreed to my request and executed it in between his tight filming schedule, well…I mean…c'mon….I'm just…humbled.

And without giving it away (like Chris Sanders' brilliant pin-up, you'll have to buy the book to experience the magic), I'll tell you that it was the warmest, sweetest write up I could have hoped for. Doug has given my goofy and gruesome little creation a hint of elegance in his words. I knew when I chose to pursue his involvement that Doug was the best man for the job. He played the coolest version of Death EVER, as well as an awesome zombie. Had he played a duck in his career, I think the coincidence might have made my head explode. Doug was perfect, and what he wrote was better than I could have dreamed. You can view his very awesome website here.

So I had to share this little beacon of happiness that fell into my hands. I've been very fortunate in the events leading up to Dead Duck's publication, and very appreciative. If nothing else were to come of it, I'd be content to know I've accomplished this much.

Five days, folks. Your good vibes will continue to be appreciated.