I'M SO BACK THAT IT STINGS WHEN I PEE!!!

Whatever the hell that means. Anyway, rejoice in the fuzzy majesty of what is my first new blog in a couple months. Like I said before, I hate posting when I don't actually have any real news to share. I've got enough other outlets for inane blather and pointless rambling that I don't need to crud up this blog, by far my most important. So, let's cut into the meat and see what bleeds:

I just got my children's book, Pillow Billy, printed up at lulu.com, an online printing press that does a professional-looking-as-hell job, and at a fraction of what Kinko's would've cost. I ordered two copies initially, and sent one off to Boyds Mills Press, a children's book publisher in Pennsylvania. The other copy I'm keeping on hand just to show people, and to have a completed symbol of my efforts of the past two years.

I've been drawing caricatures quite a bit. In fact, 2006 has been a banner year for my career in caricaturing. I've had at least one gig per month since January, which given Michigan's crappy economy is saying quite a bit. I'm actually a little bit ahead financially right now, and for this time of year, that's rare. So I'm happy about that. I have a couple gigs lined up for September (at a mall in Novi) and in November (at Northwood University here in Midland. Let's hear it for short distances and less gas-spending!). I feel like my caricaturing is reaching a new plateau. I've adopted a somewhat more detailed, kinda illustrative style which emphasizes detail while still striving for simplicity. Some say it's a step away from my normal cartoony style, but that side of my ability isn't hurting for attention anyway. I think the cartoony style will always be the standard I'm most recognized for, and I wouldn't have it any other way.

I've been approached to help illustrate an independant comic book published out of Shepherd, MI. I'm not sure whether I'll get aboard that or not. The work I've seen of it thus far (specifically illustrations) are top notch, and I'd be creating a comic strip of the established characters, which is tempting. But if it's not worth it financially, then there's no point. If I wanted to do something purely for the exposure and the art, I'd self publish my own stuff. So that's still up in the air.

I've also been posting artwork on Deviantart.com pretty regularly. The only problem there is that many of the other people who post on the site are considerably younger, and don't necessarily "get" the references I kake in some of my cartoons. Take the following one, for example: 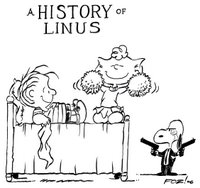 Now, obviously anyone this side of a playpen has heard of Peanuts, regardless of age. However, not everyone is of deciding age to have seen or rented David Cronenberg's film, A History of Violence. So while I feel that this is a really funny idea and a great tribute, a lot of the kids on Deviantart just don't get it. Sigh. Such is the tragic case of ten year old trapped in a 31 year old's body. Guess I need to start playing with the older kids.

So that's about it for now. Hopefully I'll be back much sooner than last time with another update or something really cool to yell about. Talk to you then!

Jay
Posted by Unknown at 1:07 PM 2 comments: Links to this post