What’s new in the art district of Foz Town? Take a left down the next dead end back alley you come to, and knock twice on the rusty steel door next to the comatose hobo. Ask for Guido, and tell him that the blue moose begs for no man, not even Mr. Rogers. Then step into the velvety darkness and partake in the sinfully sweet vapors of my latest happenings.

Screw drawing. I shoulda been a writer. Or a plumber. I plunge a mean toilet. But anyway, to the news…

A lot of gigs have fallen into my lap in the past couple weeks, and neither my portfolio nor my wallet is complaining. Allow me to list them off…

I got contacted through a pal at Deviantart.com to draw one of his own cartoon characters for him. This is what I came up with. 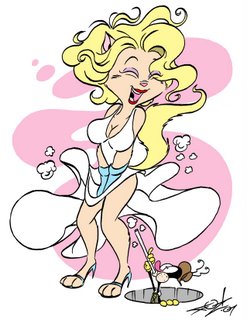 Jesse, my aforementioned pal, is a talented cartoonist in his own right and has created the most elaborate and fascinating world for his characters, reflective of the old school Looney Tunes crew. The character he had me draw is a vampish chick named Maxine Mink. It was an easy choice, since I thrive on drawing sexy female characters. Anyhow, Jesse became the first commission I’ve obtained via Deviantart, and I’m very appreciative that he hired me.

Another cartoonist brother in arms, Evan Shaner (who took over the reins of CMLife’s staff cartoonist after I graduated) hired me to draw a tribute to DC Comics super villain Bizarro. Here’s what I came up with. 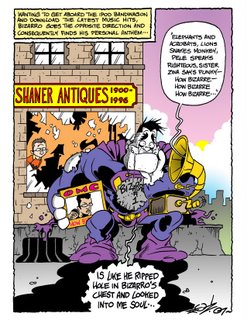 I really did my homework to get this character just right. I won’t go into the complicated process, but the end result was that Evan digs it. I strive for absolute satisfaction in my work, even if I rarely find it in my own assessment.

I’ve been hired by a hairstylist my birth mom works with to draw her and a friend, which is a quick assignment that really pays off. Love it when those come along.

I completed my “audition” artwork for that top-secret project that I cannot discuss in detail. I’ve been told that in approximately two weeks I should be contacted about whether or not I’m chosen as the artist on the project.

I'm still working on that greeting card submission I mentioned last time. I've got some really great samples and I'm anxious to send them out. Four more should complete the package. Here's one more for you guys to look at in the meantime. 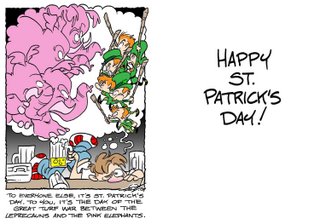 It looks like I’ll be drawing caricatures for Shields Elementary’s Read program, which my grandma is a volunteer with. Obviously I’m taking the gig at a serious discount (about half my normal rate) because my grandma is involved. She’s been one of my biggest supporters of my art for as long as I’ve been drawing (age 2), and I owe her a lot. If I was a better grandson I’d just do it for free, but she offered the money before I asked for it, and regrettably, I need the cash.

Today I just got a call from my contact at The Midland Center For The Arts. I’m not sure if I’ve ever written about it here, but I taught there briefly 2005 when we first moved to Midland. The experience was good, and my contact is an extremely cool guy and fantastic artist. But the downside was that the pay wasn’t great, and I had to miss work at the parks (my day job) to accommodate my teaching, which didn’t really balance out financially and my have left me in the hole a bit. So last year I turned down repeated attempts of my contact trying to get me to come back to teach. I explained why I couldn’t, and felt bad because he’s such a cool guy. So now, a year later, a get a message from my contact practically begging me to come back to teach. He must have really wanted me there, because he buttered me up like no one has in as far back as I can remember. If anyone ever tells you “there’s no one as good at cartooning as you”, it’s hard to ignore. He suggested maybe doing a one weekend cartooning workshop, and said that it pays more than regular classes. So I’m considering it. Haven’t decided yet, but I’m considering it.

Still no word from Mackinac Island Press. Hopefully soon. I may just attempt to contact them myself. More news on that when it happens.

So that’s about it. I anticipate more work on the horizon, since the summer months characteristically yield the most gigs (though I admit that 2007 really hit the ground running for artwork thus far). Take care kids, and more news as it presents itself.

AND THE CHEESEBURGER PRESSES ON…

…because my studio is Cheeseburger Press. Y’see, if you read these blog entries regularly, that reference not only would make sense, but would be pretty damn hilarious. Okay. Not hilarious. Ironic maybe. At least as ironic as a cheeseburger could aspire to be. But enough of that noise. Onto the news.

Still no word from Mackinaw Island Press about Pillow Billy. I still have hope, and that’s been enough to get me through my entire life. So what’s a few more weeks? I’ll let you know when something happens.

That magazine is England hasn’t gotten back with me, so I’m for chalking it up to a “Thanks but no thanks” on their end and a best shot given on my part. If by chance they do contact me after I post this blog, you’ll be sure to hear about it. But for now, I consider it done and slowly turn the page.

My big involvement over the past couple weeks has been my return to greeting cards. Or more accurately, my return to attempting to break into the greeting card biz. This will be, I’m pretty sure, my third major attempt to impress the Hallmarks of the world. My first attempt around 1999 was, I see now, a bit amateur and not as thought out as it should have been. My second attempt in 2004 (as seen on my website) looked professional enough, but may have been a bit “edgy” for the greeting card game. But my latest attempt looks professional, has definite focus, and feels like a good mix of mainstream and vintage "Foz" humor. While researching greeting cards, I noticed that some artists who freelance for these companies maintain their studio’s logo on the back so that even though, say, American Greetings is printing the card, it’s still recognizable as the work of the individual cartoonist. So it goes without saying that, in my current batch of cards, I’ve slapped on my Cheeseburger Press logo. If these cards sell, it will be the first time I’ve used my studio name in a completed project, let alone a professional paying one. So that could be cool. Anyhow, here’s one of my new cards for you to view. Hope you dig it. 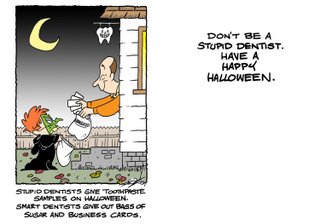 So that’s that for now. More news when there’s more to tell. Later soon.

Jay
Posted by Unknown at 1:34 PM 2 comments: Links to this post