HDJP: The Foz In High Def! 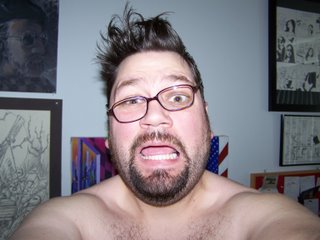 Like the hair? Thanks. Grew it myself. Why drop cash on a product called "Bed Head" when I already own a bed to do it for me? Just add ten hours of sleep and voila. You've got Buddy Holly, Kramer and Kevin Smith's illegitimate love child.

So the last two assignments I've gotten from Interlude Magazine have seen me turn a new corner in my artistic career and abilities. Jean Charbonneau, the ed in chief, often refers to illustrations she's seen in other magazines when she has an idea for an assignment. In the case of these two I've mentioned, the examples she showed me were in the style of Vector art.

Essentially, Vector art is cartoons shaped with big blocks of flat color without the typical black lines to give them definition. It's basically all computer work, if you do it the way graphic artists do it. However, I'm a hands-on kid from a hands-on background. I've learned Photoshop through a piecemeal tutorial via various friends in the know and my own trial-and-error experimentation. So I came up with my own way to create the Vector style.

I draw out the cartoon by hand, scan it into the computer, color it in Photoshop, then painstakingly go in, erase all the black pen lines and polish and sharpen the remaining blocks of color using a combination of the Photoshop tools. In the end, you'd never know that a good ol' fashioned marker laid the foundation for the final piece, which makes me kinda sad. But it's hard to stay sad after seeing the results. It's rare, but sometimes I impress myself. These pieces gave me good reason. 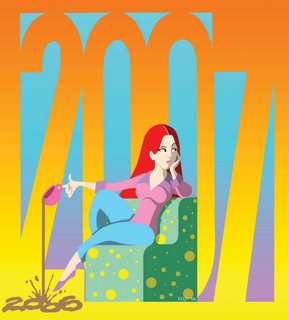 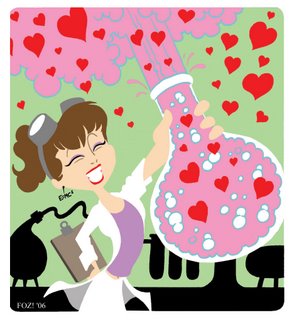 The hard truth of it is that, in my belief, any monkey with a keyboard can call himself an artist these days. That's what Photoshop and Illustrator have done; given the untalented the ability to buy talent down at Staples or OfficeMax, install it in their computer and print themselves out a masterpiece. But it takes a real scope of vision and keenly honed talent to think up an idea and execute it by hand with rudimentary materials. That's why I still use the tools I use. I want people to know that it takes more than a mouse and a modem for me to be talented. I was born with whatever I can do. I just hope that doesn't get lost in these new mostly-digital pieces.

Jean assures me she still has need for my standard hand drawn cartoon work. But for these last few assignments, a new approach was what was needed. Each piece took me between two and six hours to execute, which is a long time for me. But as I've said, the results speak for themselves. And this is the most I've been challenged artistically since taking Painting with Larry Butcher back at Delta College over ten years ago. It's refreshing to know I can still be challenged, introduced to new methods, and conquer them while making them my own.

On the job front, the whole Bay City Times things is down the tubes as far as I'm concerned. After the contest, they never contacted me to say whether or not I got the position, and honestly, I'm not too bothered by it. I doubt the money would be much more that what I make at my day job now, and there was no promise of health benefits or anything. The Times has shown me how bad their communication skills are, and that's enough to keep me from pursuing a career with them.

I have, however, had some gigs come my way, which is always great. I drew caricatures at my friend Jason's wedding last weekend, I have a two hour caricaturing gig at Northwood University this Saturday, I've got a date booked in March to draw caricatures for Hemlock Elementary (an annual event at least seven years running now), a slew of gigs lined up for May and June, I've got a caricature gig lined up for next October at a country club for a Dow Corning event, and I'm currently working on my first ever cover for Interlude Magazine.

This is a big deal to me, because essentially I'm responsible for "selling" that issue. Whatever I put on the cover is what people will first see and determine whether or not to peruse, purchase or put down the magazine. Plus, Jean tells me it's the first time they've used an illustation for the cover. Nice to know I'm setting a trend here. So for your benefit, I'm showing it to you guys, my core audience, before it hits the stands. 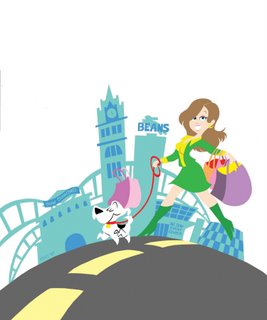 It's drawn in my newly adopted Vector style (as per Jean's request), and it was a bear to create. But it looks sharp. I could see it in Entertainment Weekly or Cosmo, y'know?

Lastly, a weird little moment came down the pipeline recently. Laura was online watching Youtube, perusing the Conan O'Brien clips. She comes across this one homemade compilation of Conan clips set to song by some anonymous fan, and in the midst of watching this montage, notices my caricature of Conan pop up on the screen. So anyway, I e-mail the guy who posted the video, telling him, "Great video. I especially loved the hella cool caricature of Conan. At least, I thought it was hella cool when I DREW IT." I then suggested that, while I didn't mind him using it, that'd I'd appreciate him giving me credit for it. He wrote me back soon after, saying he couldn't believe the artist who drew it found him, and didn't know where it had come from originally (meaning someone else must have ganked it off my website before he did and he found it from them). But he promised to give me props for my work, and as you can see in the clip's description, he has. Always great to snag these guys who try to use your work without your permission or knowledge. Bill Watterson should take note and nail the little bastards who employ Calvin and Hobbes for window stickers showing them pissing on Ford or praying at the cross.

So that's about it for now. More news as it comes. Thanks for sticking with me thus far. Hopefully one day I'll have something so big to report that you'll all be able to say, "Wow! I remember when that guy was just getting by doing caricatures! NOW look at him!" 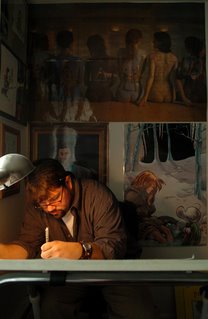 Back in late October I mentioned an offer from a local newspaper wherein I'd produce an on-going comic strip for them. They offered me a price, I talked to some industry pros, and consequently deemed the newspaper's offer unfit for the service I would provide. This ended up an ongoing saga with the newspaper, which I'm now comfortable enough to credit as The Bay City Times. Much as the editor disagreed with my asking price, he was relatively determined to get my services as a staff cartoonist. He upped the ante in the form of a contest.

He said if I created a comic ("I already have one ready to go", I challenged) and allowed him to run five of my strips alongside several established syndicated comics, The Times would hold a contest and allow readers to vote on their favorite strips. If mine turned out to be one of the favorites, we would then, in the words of the editor, "Talk turkey." I understood everything he said up to the turkey reference. I assumed it meant that popularity of my work with readers would incline him to sweeten the pot in order to bring me aboard his paper. However, I recalled him saying in an earlier meeting that he wouldn't allow himself to pay me more than the standard weekly rental fee that he paid for the established syndicated strips ($15.00. Per week. Try not to choke.). So I can only assume that whatever the new offer would be, it would amount to more than that.

So anyway, I agreed to allow him to run my five strips gratis, and then we'd see what came of it. The first strip ran Christmas day, and the subsequent strips ran until Dec. 31st, when The Times issued ballots in their New Year's Eve edition for which readers could votes for their favorite strips and mail in the results. It's now January 2nd, and I have no idea what's gonna happen. The mail hasn't run since the day the ballots were printed, so people won't be able to send out their votes until tomorrow. And let's face it, with almost four days having passed since the ballots were issued, I doubt anyone will remember or care to rush out to the post office and make their cartoon preferences heard. However, I am hoping that between the end of this week and the middle of next that I'll know one way or another if my strip will have been deemed worthy for consistent publication. Even still, if the money isn't green, I'd still pass on the offer. A guy's gotta pay the bills, after all, even if doodling silly cartoon characters 365 days a year is his source of revenue.
Posted by Unknown at 6:47 PM 3 comments: Links to this post