Click on the image for my first CARTOON blog entry (then click on it AGAIN for an even clearer view)! 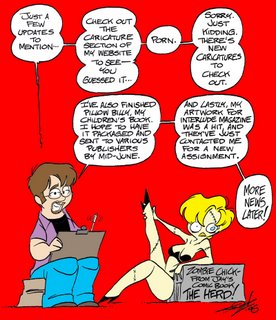 Posted by Unknown at 4:15 AM 2 comments: Links to this post

Good News Deflated and other such hot air

Well kids, I said I'd let you know what the good news from my previous entries was, whether it happened or not. So here it is:

"Yenny" creator Dave Alvarez offered me the chance to illustrate an ongoing comic strip that he would write which would be published in Puerto Rico.

Basically he'd e-mail me the scripts, I'd draw the cartoons and e-mail the work back to him. It sounded like a sweet gig. When Dave asked me how much I'd need to be making to be a part of this project, I consulted my friend Greg Evans (creator of the comic strip "Luann") to see what the standard rate for such work would be. Once I had those figures, I sent them to Dave and waited for his response, which I just got ten minutes ago.

Unfortunately, Dave said he wouldn't be making enough off the comic to realistically meet the amount I required to be a part of it. He was very cool about it, and suggested that maybe we could collaborate again sometime down the road.

So that was that. I love the guy, he's been very good to me, a fellow cartoonist whom he's never actually met. I'd just be lying if I said I wasn't disappointed. Once again I allowed myself delusions of an actual steady, good-paying career in cartooning, just to see it come to nothing. It's very, very frustrating. But there you have it, good news gone bad.

On another topic, I hope you guys have gotten the chance to check out my illustrations in the recent issue of Interlude Magazine. For a list of places in the tri-cities where you can find it, cut and paste this link:

And on yet another note, my friend and co-worker Betsy who hired me to draw caricatures at Merrill High's prom this past Saturday has provided me with a couple pictures from the event which I'm posting here for you to see. The lovely lady with me is my beloved fiancee, Laura, for those who don't already know. It was a very nice event, and I appreciate Betsy allowing me to be a part of it, and for giving me the great photos to remember it by.
Posted by Unknown at 5:04 PM 4 comments: Links to this post