NO SHOW THIS WEEK, BUT LOTS OF NEWS!

So I said I'd wait to let people know if there would be a show this week, depending on how busy I was. Well, I'm busy. REAL busy. So the show's on hiatus this week. I'd like to keep an "every other week" schedule, but we'll see how well I get caught up on things.


RUE MORGUE MAGAZINE:
I've had regular e-mail correspondences with art director Gary Pullin, and we're moving forward with Necronomicomics! It looks like the first regular installment of my comic will appear in the August 1st issue. I've got three comics in the hopper, and five more that I've just written and am anxious to start drawing. With my love of horror films, I've no shortage of inspiration, and I look forward to sinking my teeth into this project like a zombie into some poor sap's chest cavity! 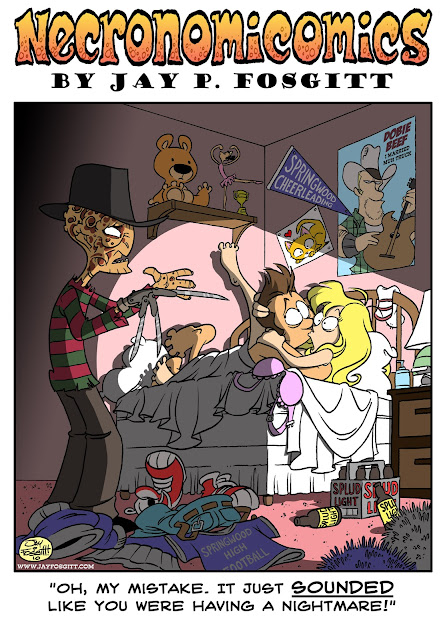 WIZARD WORLD CHICAGO:
I received word yesterday that I've been invited as a guest at Wizard World Chicago! That means a free table, which is a big deal to me! It also means that the convention community is starting to view me as a professional, someone worth having at their shows. For me, it's an honor, and I look forward to seeing all my Chicago fans (and visiting fans from outlying regions, too) in August!  In the meantime, check out my entry on their website here!

WEBSITE NEWS:
I'm not sure how much I've mentioned this, but my website is undergoing a HUGE overhaul. It's not apparent if you view the site right now--the old version still exists as we create something new to replace it--but when you see what my pal and comic book artist/letterer/web designer Nate Pride has concocted, I think you'll be as impressed as I am! No official date of unveiling as of yet, but expect to see cool stuff when the time comes!

So other than that, I'm swamped with commissions, comic book assignment, sketch card assignments, impending caricaturing gigs, and even a comic book workshop I'm conducting next month! Whew! So I'll see you when I see you, and report any new events as they come (and as i can find time to report 'em)!

--Jay
Posted by Unknown at 8:41 AM No comments: Links to this post

NO SHOW THIS WEEK, BUT STILL PLENTY TO SEE!

Issue #111 of Rue Morgue Magazine has finally hit the stands, and my cartoon has appeared in it! I've spoken with the editors, and thanks in no small part to your e-mails, they're talking about running Necronomicomics as a regular monthly feature! But we shouldn't cease the e-mails yet! For a better understanding of what I'm trying to accomplish, here's a recap:

I'm starting an online campaign to get my new horror comic strip, "Necronomicomics", into Rue Morgue as a regular feature, and I need YOU to send some e-mails! Contact your local bookstore (most big chain stores carry it)  and ask for issue #111 of Rue Morgue Magazine. Buy the crap out of it, then send the most glowing, persuasive, begging e-mail you can to the editor and the art director, telling them how much you dig "Necronomicomics", and how you want to see it as a regular feature! Sound like something you'd be interested in? I know I am! Here are the addresses you need to write to:

Remember, the issue should come out today or Wednesday, but keep looking until you find it! Thanks in advance to anyone willing to help. Your collective efforts got "Dead Duck" in print and completely sold out that first printing, so I know your help could positively effect "Necronomicomics"!

I've worked on several sketch card sets over the past few years, and my most recent work is proving to be the most fun!

I've started my second set for Rittenhouse--Marvel Universe 2011! It allows me to draw most any Marvel character I want, and so far, this has been a dream come true! The thirteen year old kid in me who bought stacks of comics every weekend is just geeking out to no end!

So That about wraps it up! Thanks for reading. Catch my live Sketch Show next week, and I'll have more news for you soon!

--Jay
Posted by Unknown at 9:18 AM No comments: Links to this post

Okay. So last Wednesday's Live Sketch Show did not go smoothly. The problem was, I broadcasted from my new computer for the first time, and the Ustream website didn't jive with my new PC at all. I was somehow prevented from activating "broadcast", and after finally figuring out the problem fifteen minutes into the show, I still couldn't get the sound to work, which took another five to ten minutes to figure out. While I monkeyed with the website, I noticed a lot of folks on the chat window were wondering why I was absent for that first half hour. By the time I got things all worked out, a lot of those people had long since left and never came back. Needless to say, I was in a crap mood after that and my whole game was thrown off.

This week's show will be better.

Catch me Wednesday night at 8 pm eastern time at this link, where I'll be working on one of my current projects (Marvel Universe 2011 cards for Rittenhouse, Transylvania Television cartoons, Bodie Troll, Little Green Men, Necronomicomics). As always, I encourage you to contact me during the show via Ustream's chat window! You need to log in to Ustream to use the window, but registering is easy. It only takes a username and an email address. Once you've entered that info, you can chat with me. Just like always, I'll have loads of useless trivia and my own brand of quirky humor to inject (or infect) into each sketch I create!

Though the official release date for Rue Morgue Magazine #111 was Sunday, May 1st, no bookstore that I've contacted has received the new issue yet. However, reliable informants tell me the issue is due to hit shelves today or Wednesday. That's when you'll be able to see my "Necronomicomics" for the first time in print, which excites me to no end! I mentioned this in last week's blog, but it bears repeating here...

I'm starting an online campaign to get "Necronomicomics" into Rue Morgue as a regular feature, and I need YOU to send some e-mails! Contact your local bookstore (most big chain stores carry it)  and ask for issue #111 of Rue Morgue Magazine (it has an illustration of director John Waters on the cover and looks like this). Buy the crap out of it, then send the most glowing, persuasive, begging e-mail you can to the editor and the art director, telling them how much you dig "Necronomicomics", and how you want to see it as a regular feature! Sound like something you'd be interested in? I know I am! Here are the addresses you need to write to:

That's about it for now. As a recap:

1. Watch my show Wednesday night!
2. Find Rue Morgue #111 and help me in my campaign to get "Necronomicomics" a regular spot!
3. Come see me on FCBD at Wonderworld this Saturday!
4. Pre-order "Little Green Men" now!


Glad to have you on board, friends and fans! Together we can spread my wonky imagination across the globe like some kinda Alaskan Moose Pox or something cool like that!