I know that towards the end of 2011, my posts have gotten more infrequent. I think that's connected to my workload, which slows down considerably around winter. Less work means less to report on. I do appreciate everyone who's kept up with what news there has been. This being my last post of 2011, I'll give you a run down of what you can expect in 2012.


So that's what's on the books for 2012. Anything else that's to come is as much a surprise to me as it is you, and I look forward to it. I'll leave it here with some of the last drawings I did in 2011. Happiest of New Years to all you kids, and thanks for sticking with me! 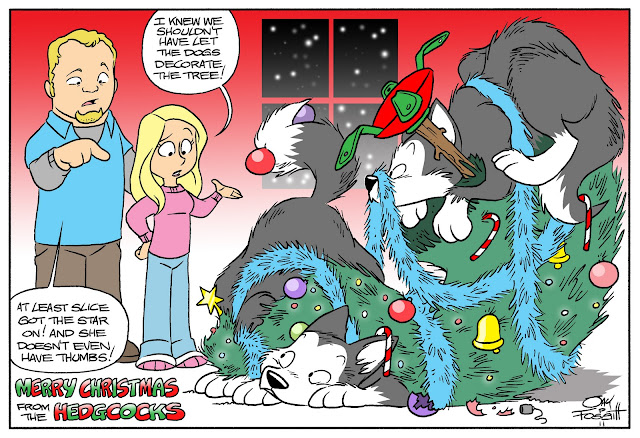 The 2011 Christmas card I did for my friends, Jason and Renee Hedgcock. They've been two of my closest pals since college, and I'm honored that they have me draw their card each year. 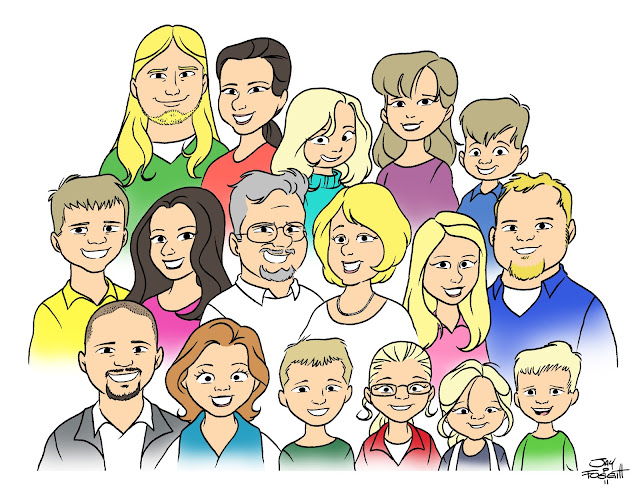 A family portrait that Jason and Renee had me draw for their extended family as a Christmas present. 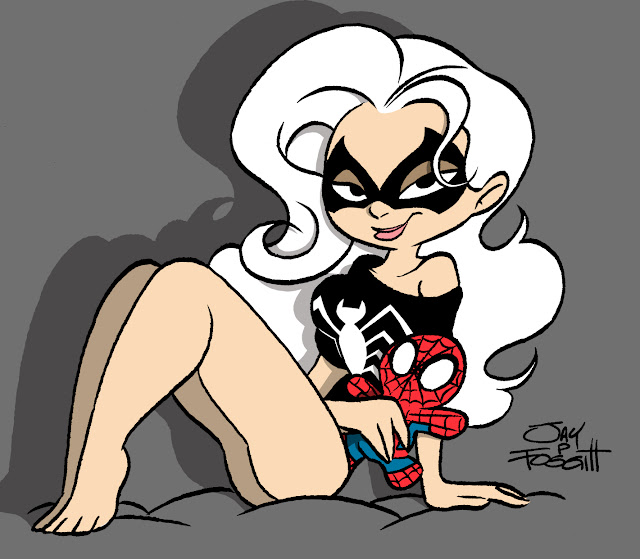 A commission I received to draw The Black Cat, a sexy villain from the Spider-Man comics. 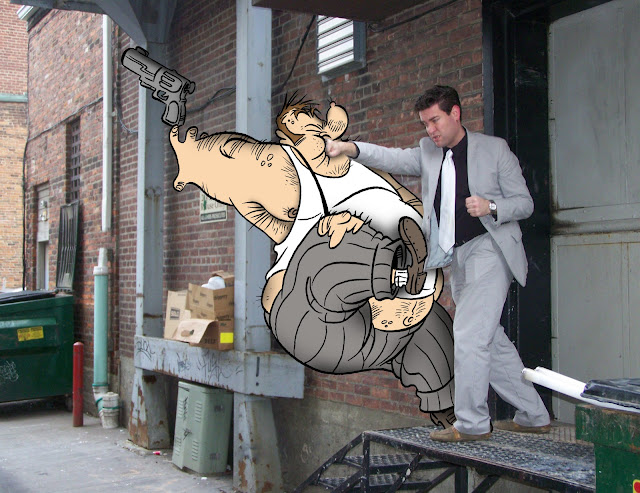 An artistic experiment I did, once again combining my cartooning with my photography. 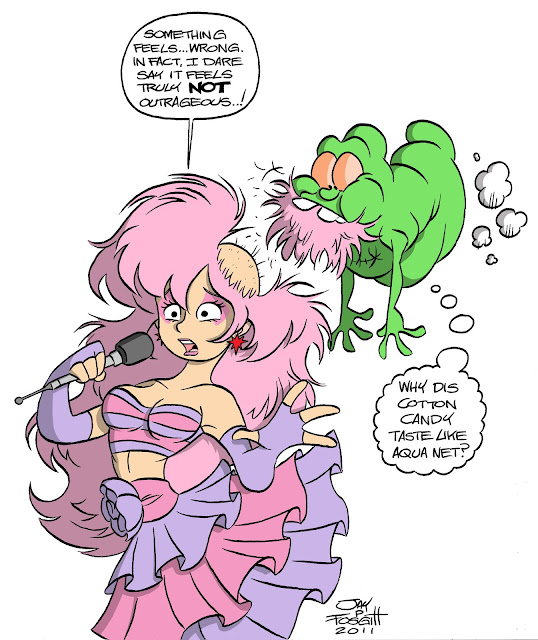 A piece I just did for fun, lampooning 80's cartoon characters Jem and Slimer. 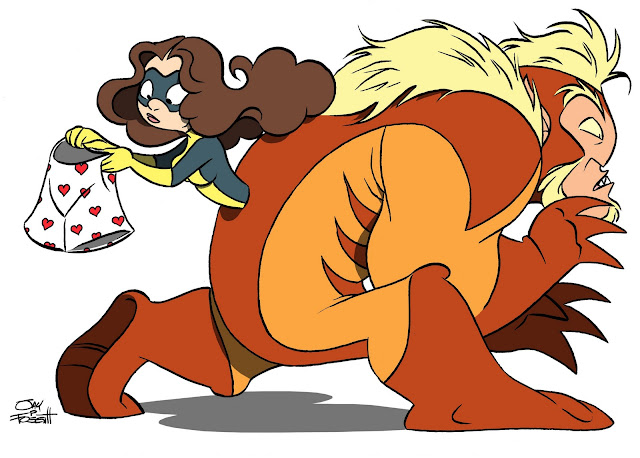 And lastly, this piece I drew of Kitty Pryde and Sabertooth, from the X-Men Comics. This is part of an art trade I did for Ryan Ruffatti, who built the comicpress site that hosts Dead Duck.

NEWS FOR THE FIRST TIME IN A MONTH AND A HALF!

I'm sorry for month and a half delay since my last post. I've been playing catch up with commissions and deadlines all this time, and both my blog updates and Live Sketch Show had to take a backseat. But things have slowed down a bit, and I'm finally able to get back to business!
To begin, my LIVE SKETCH SHOW returns tonight at 8 pm eastern time. One thing I haven't had time to do during my absence is to draw just for the fun of it. So that's tonight's theme. I have two ideas I've wanted to illustrate for awhile now, one a mash up of two 80's cartoon icons, and the other a loose parody of a 70's Saturday morning cartoon. That will be what's on the drawing board, so no requests will be taken tonight, but you're encouraged to tune in and chat it up with me while I draw. You can reach me during the show via Ustream's chat window. You need to log in to Ustream to use the window, but registering is easy. It only takes a username and an email address. Once you've entered that info, you can chat with me all you want. I hope to see you all there!
Next up, I hope you're all faithfully following my DEAD DUCK WEB COMIC. Though you may think you're familiar with this current run of stories, there's plenty of brand new trivia with each page I post that should keep you interested and anxious for the next installment! Plus, by this time next year, there should be all new Dead Duck stories to share. So stick with Dead Duck, and be sure to tell me what you think of the comic!
December marks my fifth month working on "NECRONOMICOMICS", my monthly horror movie-themed cartoon that runs in Rue Morgue Magazine. I'm still having an absolute blast drawing it, and Rue Morgue has been incredible to work for. I've posted some of my recent installments below for you to check out. Be sure to look for it in each issue of Rue Morgue, available in a bookstore near you! 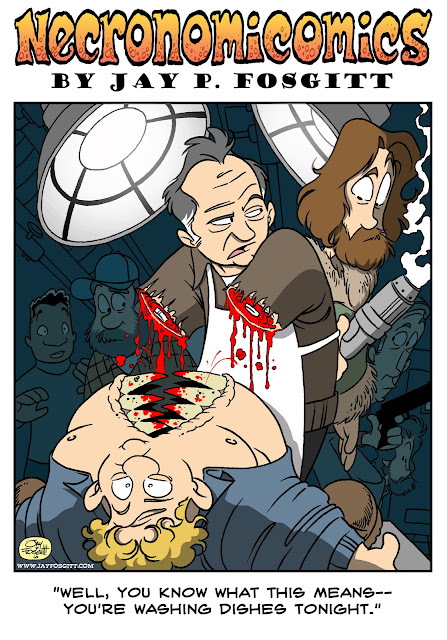 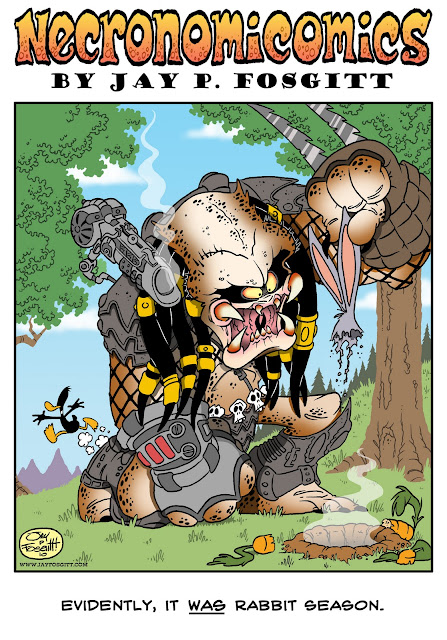 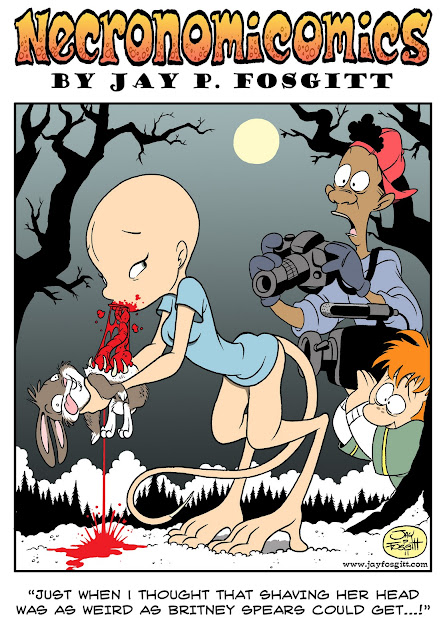 For those unaware, the cartoons parody (top to bottom) John Carpenter's The Thing (1982), Predator (1987) and Splice (2010). It could be argued that these three are as much sci fi movies as horror, but to me, that's like calling Frankenstein sci fi. So let's call a spade a spade and use it to bury the dead--until they rise again!
Lastly, for those interested in what's been keeping me busy this past month and a half, I've posted some of my recent commissions below: 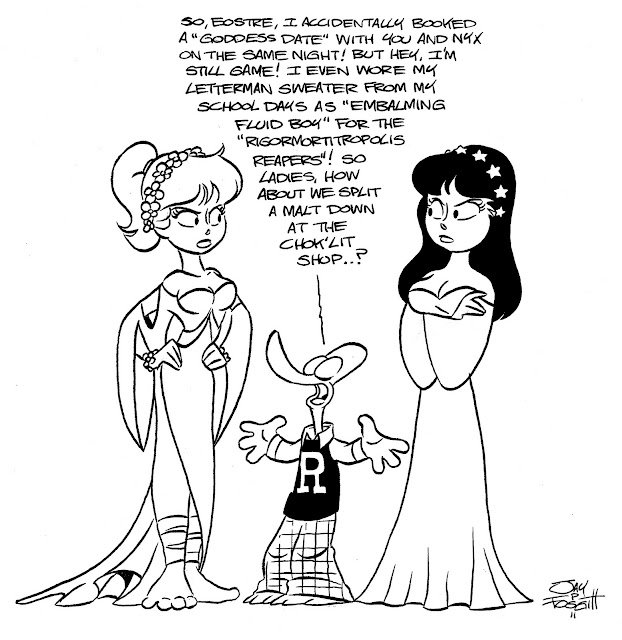 This was a commission where I was asked to draw Dead Duck on a date with the Pagan goddess Eostre and the Greek goddess Nyx. I thought drawing them as Betty and Veronica andand Dead Duck as Archie would be a hoot! 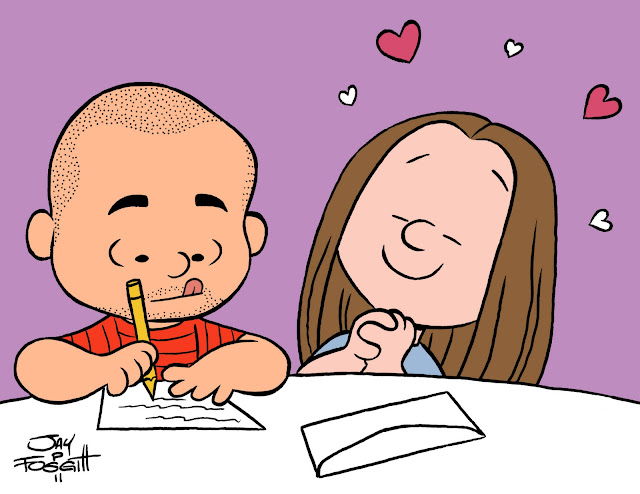 This was a commission for my friend Char of she and her husband as Linus and Sally from "It's The Great Pumpkin, Charlie Brown". 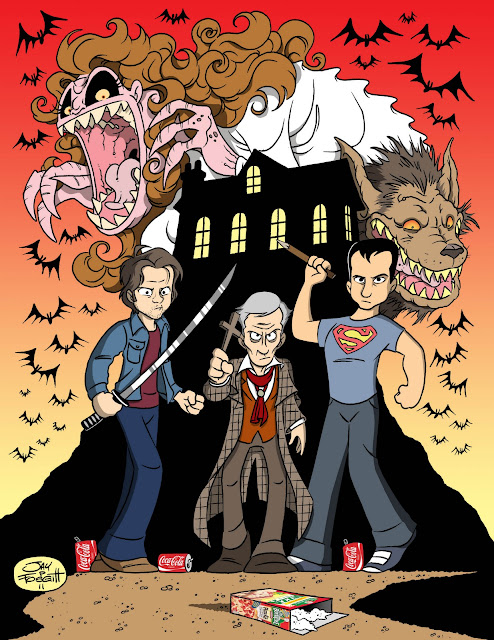 A commission for a fellow who asked me to draw he and his friend alongside vampire hunter Peter Vincent from the movie "Fright Night"(1985). The Coke cans and Chef Boyardee pizza kit were an inside joke he requested I include, but I liked those little details even without understanding them. 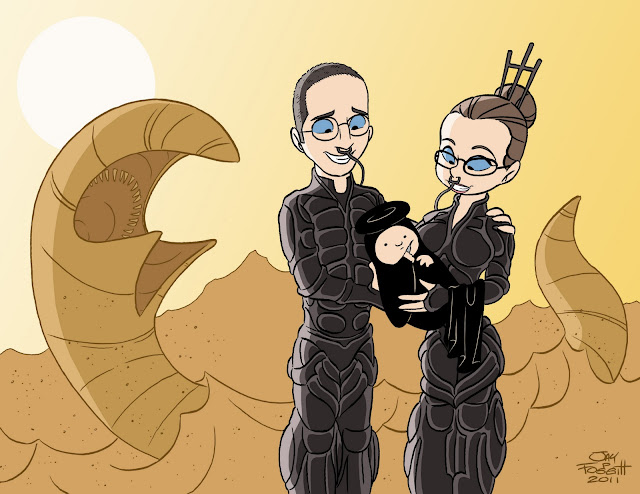 This was a commission from a friend who asked me I draw her brother and sister-in-law as characters from the sci fi movie Dune (1982). They're trying to have a baby, so she asked me to include the infant-to-be as another Dune character. I purposefully made the baby nondescript (yet still cute) so it fit whatever sex the baby turns out to be. 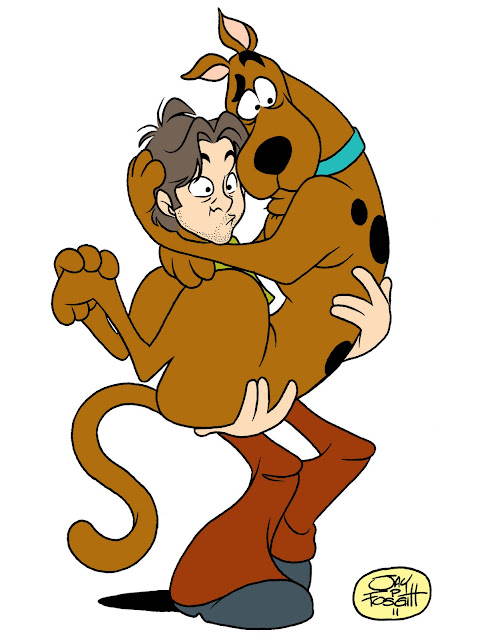 A Scooby Doo and Shaggy commission from the same fellow who requested the "Fright Night" piece. I drew him as Shaggy. 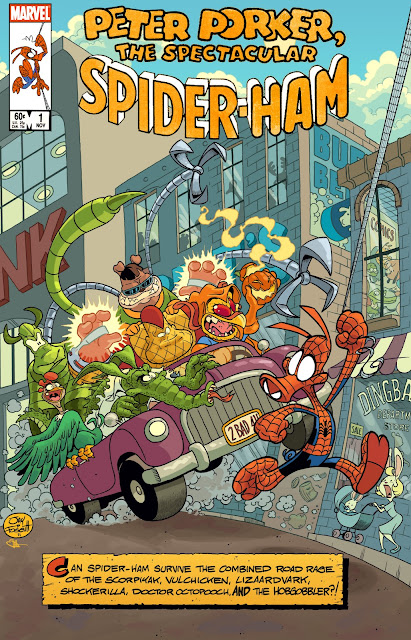 This is a piece I drew for cartoonist Jon Morris' Marvel Universe Too What If blog where artists were asked to re-interpret popular Marvel characters. The colors on this piece were done by my good friend and talented artist Evan "Doc" Shaner. 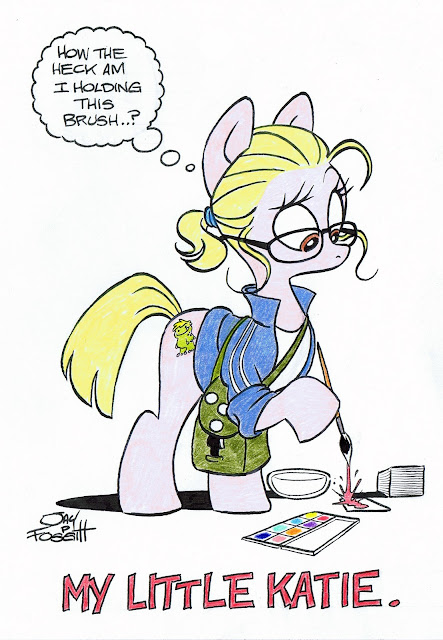 This was a birthday card I drew for my friend and fellow cartoonist Katie Cook, who, besides being wicked talented, is also a fan of the recent animated reboot of My Little Pony. 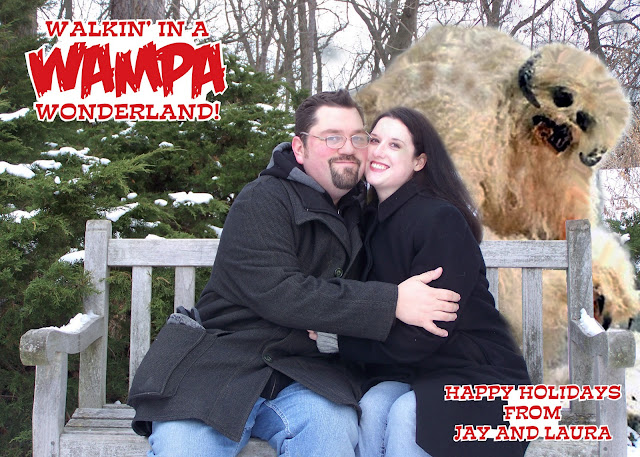 This last one is the holiday card I made from Laura and I. Our families have already received theirs, and are probably still scratching their heads in confusion. It's weird, it's silly, it's us.
To the rest of you, if I don't post again before Christmas hits, all my best to you and yours during the holidays season! I hope to have big news for you in 2012, with lots more artistic lunacy to come!
--Jay
Posted by Unknown at 1:51 PM No comments: