Let me tell you how the greatest thing just happened to me today, and how it started three years ago.

In 2011 I had been a member of The National Cartoonists Society for three years. It had taken that long for the organization to finally release an updated edition of their membership directory, allowing us members to get in touch with one another. When I got my copy, I knew right away who I wanted to reach out to first--Eric Goldberg, animator of The genie in Disney's "Aladdin". Eric has a loooooong career in animation, and he's had his hand in so many of my favorite cartoons, so I had to try and contact him.

I wrote a letter to Eric, telling him what a fan I was of his work, and how his drawing style was so influential on my own. I mentioned one of our mutual influences (caricaturing god Al Hirschfeld) and one of our mutual favorite cartoon characters (Popeye), and, being the giddy fan boy that I am, I sent along an original drawing of Popeye and Eugene the Jeep as a gift, along with a caricature I drew of Eric himself (see the images below). Lastly, I included a copy of my graphic novel, "Dead Duck", which I hoped he'd enjoy. 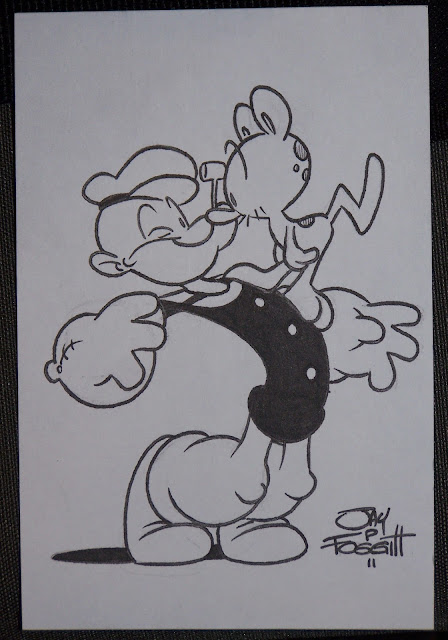 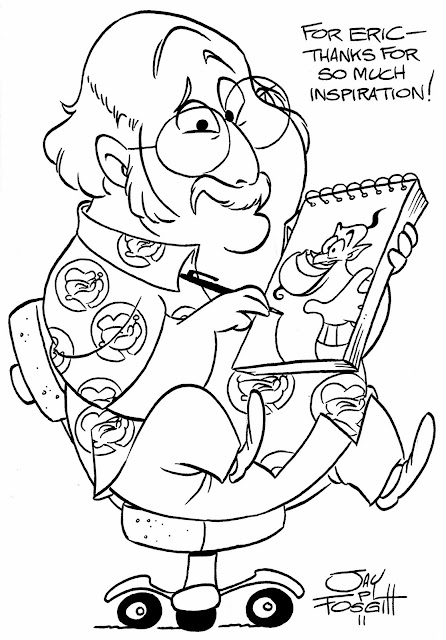 I mailed the package off to him, hoping I'd hear back--but more importantly, hoping the bundle would just reach his doorstep. I
waited for quite awhile, but never heard anything. Being a huge fan, I knew how busy the man was--he's practically THE go-to guy at Disney for old school 2D animation these days, which is a huge load to haul. So I understood the lack of response.

Jump ahead to today, January 4th, 2014, three years later. There's a manila envelope sticking out of the narrow package slot in my apartment building's mailbox cluster. It's for me, but the name on the outside was obscured by postal tape--all I saw was 'Eric', and that the home address was in Glendale, California--which any fan of animation knows is the hometown of Walt Disney Studios. I ran upstairs, hoping I was right in my deduction, carefully peeled open the envelope, slid out the contents, and oh man...if we're counting the first holy crap moments of 2014, this baby was all mine. Check out the contents for yourself (click on 'em to embiggen)... 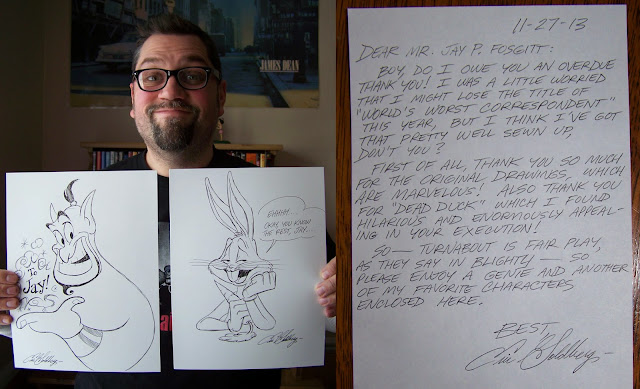 Needless to say, this was a moment of pure elation for me. Eric Goldberg is probably my biggest cartooning hero still slinging ink today. The man liked my artwork, and took the time to draw some of his own just for me--AND he wrote me a letter by hand, in penmenship that could only belong to one of the greatest animators ever to grace a movie theater or television! I couldn't hope for better than that, and man, I am more inspired than ever to follow my creative dreams and to be as great a cartoonist as he is.

Thanks for listening, friends!