DEAD DUCK RISES FROM THE GRAVE!!!

Not counting his appearance in my thus far unpublished comic book, "The Herd," my character Dead Duck (and his sidekick Zombie Chick) is appearing in his first comic book story in over ten years! Y'see, it happened like this:

I recently got an offer from a local newspaper to create an ongoing comic strip for them. While this initially sounded like a good deal, the price I was offered for my services was completely out of the question. Still, I said I'd take a few days to consider their offer. In that time, I e-mailed several established cartoonists and asked them what they thought of the price the newspaper offered me. The ones who replied told me it was chump change and not worth it, which I expected and agreed with. One of those cartoonists was Frank Cammuso, the brilliant creator of "Max Hamm, Fairytale Detective." After Frank warned me that I was gonna get fleeced by that offer, be concluded his letter by saying, "P.S. Dead Duck is a great concept!" Now, Frank must have seen my website, seen my old Dead Duck strips and deemed them worthy of his kind remarks. This, plus the fact that I've been dying to return to Dead Duck and his world for a long time was enough to prompt me to create a three-page Dead Duck adventure in honor of Halloween. The results were both fun and fulfilling, and I offer up the fruits of my creative loins here (click on each page to enlarge it): 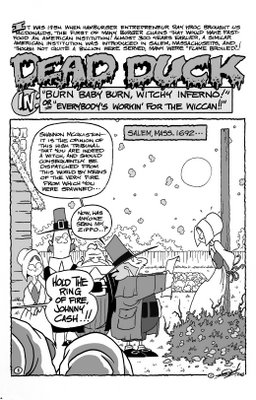 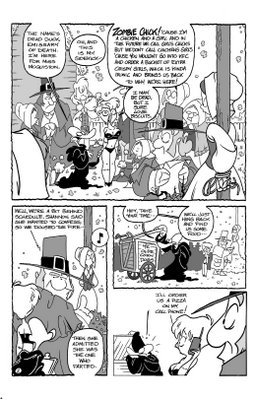 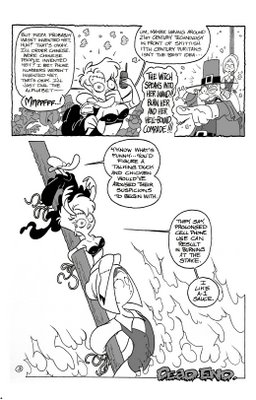 So there ya have it! I plan to occassionally do Dead Duck and Zombie Chick stories for my own amusement, and ideally, one day I'll compile them all into a graphic novel and self publish it. That's muh goal, y'see!

Now, back to the previously mentioned newspaper. So, I turned down the offer the editor made me for my cartooning services. He countered with the possibility of hiring me out to not just his paper but their "sister" paper one town over as well and thus splitting the costs of my services with the other paper. I'm going to submit five of my old "Stoutheart and Cholly" strips to him, he'll run them sequentially, then pole his readers to see what they think. If there's a favorable response, he says we'll "Talk turkey" and try to work out a better deal, presumably with the other paper at the bargaining table as well. So there's some news for ya!

Lastly, I've been doing a lot more work for Interlude Magazine lately, and they're becoming a monthly publication. That means more work for me, and hopefully, I may be able to work my way into a position as staff artist. Now, if that were to happen, then I'd probably have to choose between Interlude and the newspaper. I'm not going to worry about that right now since nothing's set in stone, but in the meantime, I kinda like the idea of for once having to choose where I'd like to work more doing the thing that I love most! So anyway, more news on that as it comes.

Love, Jay
Posted by Unknown at 4:54 PM No comments: