Fourteen years of development for the concept and the supporting cast + Two years of doodling and note-taking in sketchbooks and on the backs of restaurant placemats and bar coasters + a lifetime of ambition, hard work and drive towards a career as a professional cartoonist =
BODIE TROLL #1, CREATED, WRITTEN AND DRAWN BY JAY FOSGITT, PUBLISHED BY RED 5 COMICS, IN STORES TODAY!

And my teachers told me I was bad at math. Ppfftt.

If you've pre-ordered your copies of Bodie Troll #1, they should be available for purchase today. But odds are good you'll find Bodie in your local comic shop even if you didn't pre-order. Positive word of mouth is growing, through positive reviews, online and print interviews. So most shops that carry books by Red 5--which are substantial, given the popularity of Red 5's "Atomic Robo" comic--should be carrying Bodie Troll.

As for myself, my wife and I are VERY excited. Tonight we'll be making a pilgrimage to our local comic shop, Vault of Midnight, just to see Bodie Troll on their shelves. That's when all this dreaming and effort becomes real, when you see that colorful stack of pages looking back at you, next to the books of other creators who have made their dreams a reality. I'm going to enjoy this.

But for those of you who like their media digital, Bodie Troll #1 is also available as a digital download. In which case, you can contact Red 5 Comics, who will hook you up with some intangible Bodie Troll awesomeness.

As if all this wasn't enough to blow my mind, I just found out that a book I contributed to was nominated for an Eisner Award (a high honor in the comics industry). TEAM CUL DE SAC was a book that came out last year, focused on cartoonist Richard Thompson and his brilliant syndicated comic strip, "Cul De Sac". Professional cartoonists contributed their renditions of Richard's characters, and proceeds from the book went towards Parkinson's Disease research. You can still order copies of the book here. And you can see my contribution to the book below. 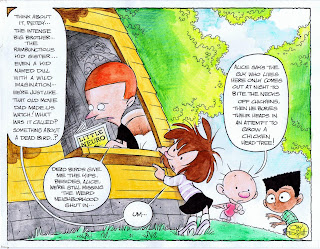 Fingers crossed that this time next year, "Bodie Troll" gets an Eisner nomination! Sooooooooooo much more news to follow in the coming weeks! Stay tuned, and in the meantime, get out there and buy yourself some Bodie Troll!