WHEN THE TROLL IS AT YOUR DOOR...


It's been awhile since my last post, but I assure you, it's been worth the wait! Dig into the pile of good news that I've accumulated since my last report...

As I type this, I'm one page away from having issue #2 of Bodie Troll fully illustrated (coloring is next up). It was enough of a milestone for me to near completion of another issue, but then a FedEx driver dropped off an unexpected package and made it MORE significant. Too early yet to be receiving my copies of Bodie #1, instead I got the next best thing... 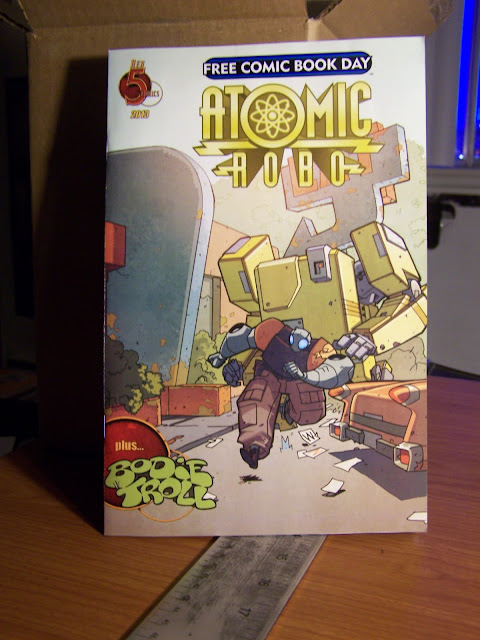 Advance copies of Red 5's Free Comic Book Day issue*, featuring stories from the Eisner-nominated "Atomic Robo" and "Bodie Troll"! Free Comic Book Day is an annual event where comic publishers put out special free issues of some of their titles, and comic shops bring in comic creators to meet fans and sign books. For Red 5 to pair up "Bodie Troll" with such an incredible comic as "Atomic Robo" is a huge honor for me. FCBD lands on May 4th, so be sure to hit your local comic shop and see if they're carrying our free comic! As for me, I'll be making my FCBD appearance at Green Brain Comics in Dearborn, MI, alongside my pals Joe Foo, Jay Jacot and David Petersen, among others. And just to tease, here's a peek at the interior pages of our FCBD issue... 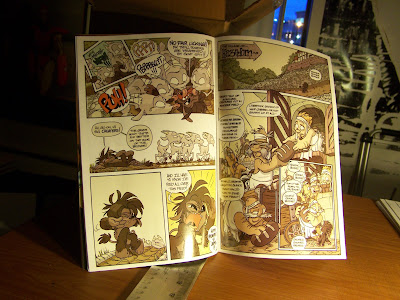 Now, as if getting this stack of comics didn't sufficiently complete the milestone of issue #2 completion, immediately after receiving the package, I got an e-mail from a fellow named Chris Wilson, who writes for the website majorspoilers.com. Chris told me he'd received an advance copy of Bodie #1 from Red 5, and he'd just written a review on it which I could see online. Spoiler alert: the review was GLOWING, as if he'd written it in ink from an 80's Halloween glow stick. I couldn't have asked for a better review to start Bodie off on. You can read it in its entirety here. Finally, THIS completed the issue #2 artwork milestone for me, and what a way to go. Chris, if you're reading this, thanks again for giving my comic a chance, and for sharing your enthusiasm for it on your website!

Though the FCBD issue comes out on May 4th, Bodie Troll #1 hits stores on April 17th. That means I'll have plenty of copies of #1 with me when I set up at table L8 in artist alley at C2E2 in downtown Chicago on April 26th! C2E2 is in my top two biggest shows of the year, and I cannot wait to see all my fellow artists and comic fans who have been making my work the success that it's slowly becoming. Chicago crowds have always been awesome to me, and I'm looking to give some awesomeness right back! Visit the C2E2 website for more info. if you're in the midwest and are any sort of comics fan, this is a show you do not want to miss!

I said C2E2 was in my top two biggest shows, which means there must be a second. I can tell you that prior to March of this year, there was no second--C2E2 was it. But when I set up shop at The Toronto ComiCon on March 9th, that show gave Chicago a run for its money. I just had a grand ol' time, showing and selling my artwork and comics to the friendliest and most receptive bunch of fans east of the Michigan border. The venue was terrific, my table neighbor Jules Faulkner (hella talented creator of the web comic "Promises Promises") was cool, informative, and generally awesome, the fans were heartwarming, and the city...oh my grand, glorious, gush-worthy Toronto, how I do adore you so...Whew. I'd need a cigarette if I smoked! Anyway, here's some pics from the show (click to biggify)... 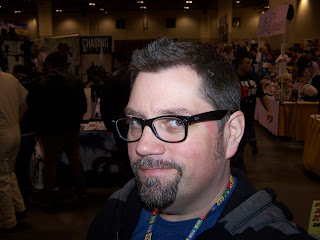 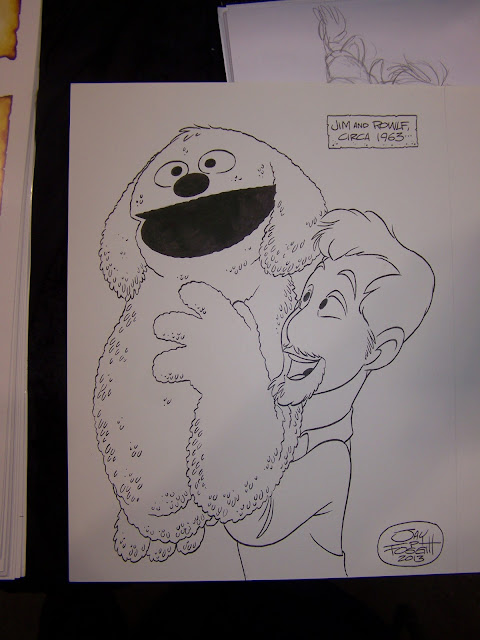 A commission for a fellow Muppet fan who wanted Jim Henson performing Rowlf. I opted to draw Jim as he looked when Rowlf first appeared in 1963, because I'm that level of Muppet nerd. 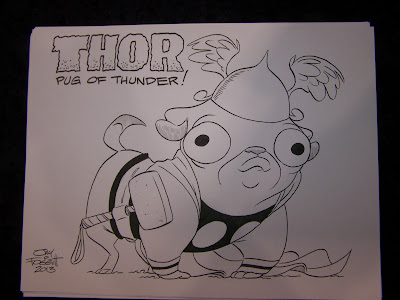 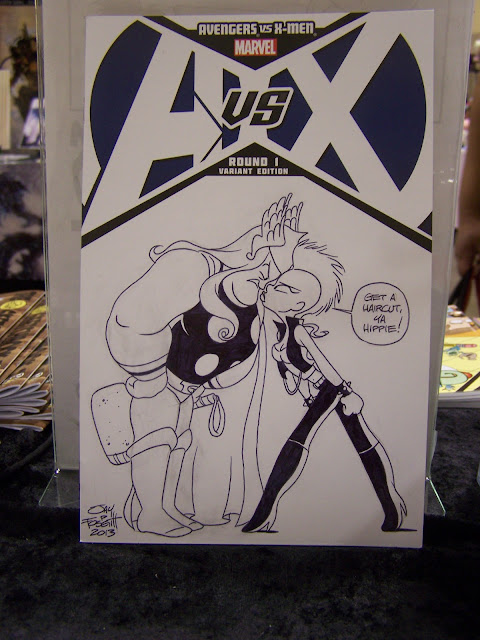 A sketch cover I drew at The Toronto ComiCon, where I drew Marvel's Thor facing off against Storm. One con goers thought I had drawn them making out. Not so much. 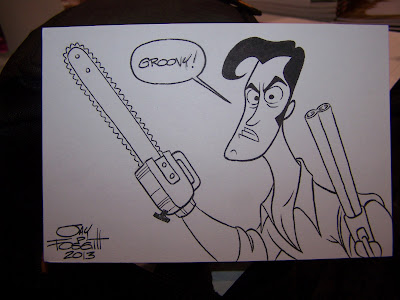 A commission of Evil Dead's Ash. 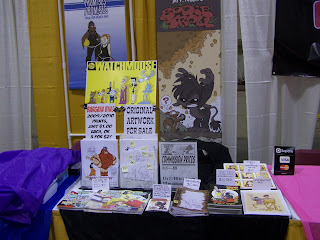 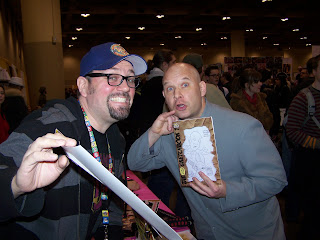 Me hanging out with Dr. Evil at Toronto ComiCon. Surprisingly, he wasn't so evil that he didn't buy a commission from me as well as one of my sketchbooks. That's my kinda evil! 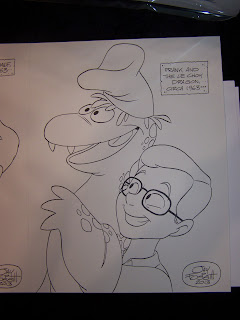 Another commission for the same fellow Muppet fanatic who bought the Jim Henson/Rowlf piece from me. In this case, he wanted Frank Oz performing the long-forgotten LeChoy Dragon. Appropriately, I drew Frank circa 1963 from when the puppet appeared in TV commercials. Me=Big ol' Muppet nerd, remember? 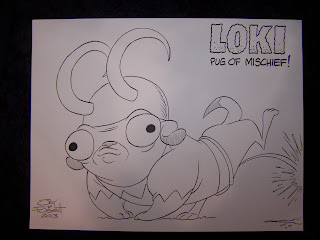 A follow-up commission to my Thor: Pug of Thunder piece, drawn at Toronto ComiCon. I mean c'mon--what's more mischievous than taking a whiz? 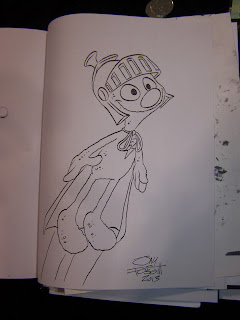 A Super Grover commission for a whole other Muppets fan. 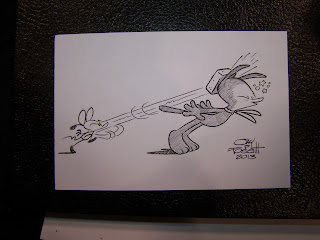 And lastly, this was a sketch I drew while at The MSU Comics Forum, but never had the nerve to put it up for sale for fear that Ignatz and Krazy (stars of the early 20th century comic strip Krazy Kat) would be too obscure for anyone but me to appreciate. I had it with me in artists alley at The Toronto ComiCon, and it was quickly bought up by my new friend and fellow cartoonist, Julie Faulkner. It takes a cartoonist to appreciate something like this, it seems!
Now, aren't you glad I waited to give you all this cool news at once? Sure, it was a lot to take in, but never say I don't leave you satisfied! 'Til the next course, my friends...