No Show, Bodie news, and Dead Duck, too


No Live Sketch Show this week, folks. My week has been filled with catching up on assignments, commissions, another major car repair and battling the combined demons of the U.S. postal service and Western Union, who, in turn, managed to lose my payment for one of the biggest comic conventions I'd had planned this season, and are making me jump through hoops to cancel that lost money order and get a full refund (long story short, I sent a NEW payment to the con May the Postal demons cut me a break this time). So I've neither the time nor temperament to put on a show right now. Rest assured, if I did a show this week, it would be filled with a lot of swearing and little fun, if any.

Each day it seems that I believe I've completed issue #1, just to find out a need to reformat something or make a change here or there. This has all been brought on by myself and my artistic obsessive compulsion, not at all by my publishers at Red 5, who have been nothing but helpful. All that said, I do believe that issue #1 is finally done, and should be uploaded to Red 5's server before the end of this week.

All week I've been receiving rough sketches, semi-finished pieces, and totally finished pieces from my artist allies, who are providing pin-ups of my Bodie Troll characters. These drawings will be special features in the backs of the issues, and the three I have lined up for issue #1 are spectacular. Renowned cartoonist Rick Geary has graced my comic with a wonderful rendition of Bodie. And my equally talented cartooning colleagues, James Anderson and Justin Castaneda have each provided pieces that took my breath away--to the degree that if I look at them at the same time, I risk suffocation. I suggest you have an oxygen tank handy when you finally read this comic, for the combined brilliance of these three may turn your lungs inside out.

And issue #2 is well underway now, with a very fun script and two fully illustrated pages completed. In this issue, we'll see a new side of Bodie--MANY new sides of Bodie, in fact, and get a brief glimpse at what makes Cholly tick.

My web comic continues to unravel my most favorite episode, "A Minion of Death Takes a Holiday". If you aren't already, follow along at the link above, and be sure to take in all the trivia beneath each post. It's the most I've ever written for a comic, and I've got a lot to say on this one.

That about does it for this week. Thanks for checking in, and I look forward to sharing more news with you all soon!

--Jay
Posted by Unknown at 11:02 AM No comments: Links to this post

I'm just putting the finishing touches on issue #1 of BODIE TROLL (coming in March! Order it through your local comic shop now!). Everything is done on it, except for an 'end of issue' statement that I'm creating, and I'm waiting on the first couple guest pin-ups to come in. I've lined up several artists to do their renditions (pin-ups) of my 'Bodie' characters, and I'll run those as special features at the end of each issue. Already I've received one awesome pin-up from Justin Castaneda, and I've seen the almost-complete pieces of James Anderson and Robb Mommaerts. These guys' brilliant illustrations make ME want to buy the comic, and I created the book! In the meantime, I've already drawn the first page of issue #2 of BODIE TROLL, and things are progressing nicely! Here's a sneak peek at Bodie getting attacked (By what? How come? better buy the book to find out!) in issue #1... 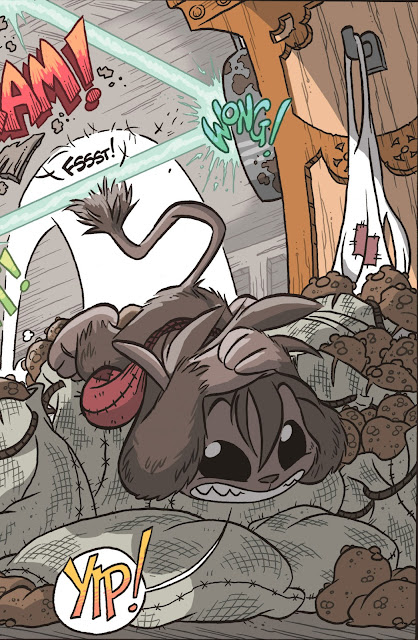 DEAD DUCK has just rolled out a new episode online, and it's my absolute favorite. "A Minion of Death Takes a Holiday" has Dead Duck and Zombie Chick entangled in a gory and goofy mystery that challenges Dead Duck's role as a Minion! Chocked full of more trivia than any other Dead Duck story, this is one not to be missed! Visit at the link above!

And speaking of Dead Duck, I'll leave you now with a commission that recently came across my desk. A fan of my work asked me to take the script from a classic POGO comic strip (written and drawn by the great Walt Kelly), and redraw that comic using Dead Duck and Zombie Chick, which I've posted below. I've also included the original POGO comic for comparison. 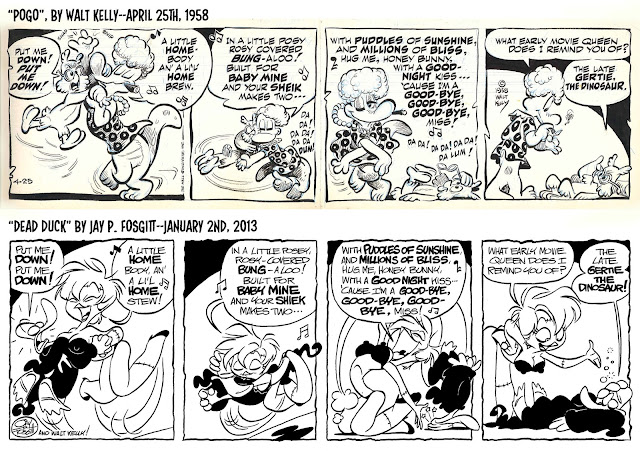 Catch you on my Live Sketch Show tonight!

DEAD DUCK: Enjoy 'em while you got 'em 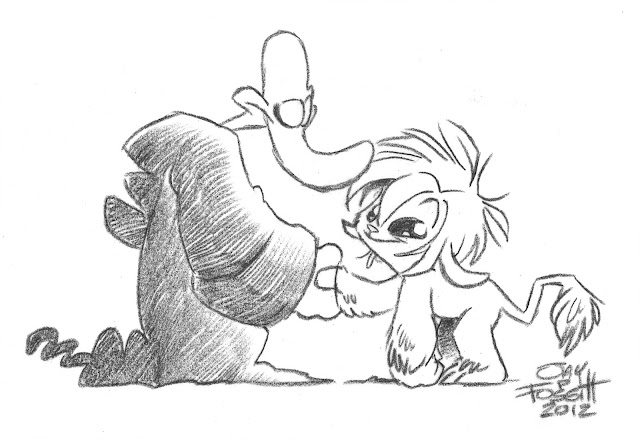 The first issue of my new comic book, "Bodie Troll", is almost done. I'm coloring the final page, preparing an end-of-issue message, and awaiting the arrival of some sure to be cool pin-ups from several artists. With a planned March release through Red 5 Comics, 2013 looks to be the year of the troll for me. But before all that, I need to talk to everyone about "Dead Duck".

I've been running my old "Dead Duck" comics online since Halloween of 2011, a new page every Monday and Thursday. My original plan was to rerun all the previously published material, while creating new "Dead Duck" stories to run afterwards. Obviously, plans have since changed, and other projects have taken precedence.

At present, I have one more story from my original graphic novel that I'll be running on the "Dead Duck web comic, and then there are three all new, never before seen stories that will run after that. When these stories have run their course in ten weeks, "Dead Duck" will then go on indefinite hiatus. "Dead Duck" will return one day, but I can't say when. So like the headline suggests, enjoy 'em while you got 'em.

Starting tomorrow (01/03/13), I'm running the "Dead Duck" episode, "A Minion of Death Takes a Holiday". It's my absolute favorite Dead Duck story, and I've included more brand-new trivia than I've ever done before. I truly feel this is one not to be missed, and I encourage you to follow it along, take in all the trivia I've provided, and please, post some comments or e-mail me personally and let me know what you think.