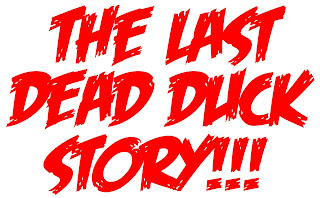 Well, not the last Dead Duck story EVER, but the last one in my graphic novel. I've just finished writing it, the grand finale to my 144 page graphic novel, and I'm going to start drawing it as soon as I'm done with this blog. By I'm getting ahead of myself…

I've spent the past month or so furiously writing and drawing Dead Duck. And out of that storm of creative fury, I've thus far written and drawn (coloring will come soon) four new Dead Duck stories, totaling seventeen pages. Now, that might not sound like a lot, but if you understand the amount of work involved in thinking up, writing down, then drawing out comic book pages, I think it's a good month's output. 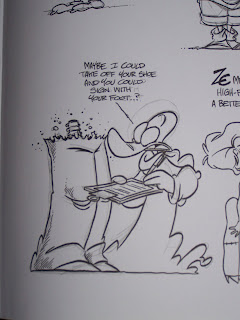 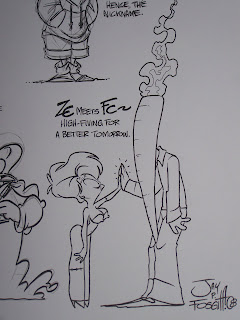 These are a couple warm-up sketches I did to christen my new sketchbook. I'd hoped they'd inspire new ideas for stories (and in the case of Bob Burden's superhero Flaming Carrot, a hopeful crossover one day). As it turned out, they didn't inspire much, but they were fun to draw nonetheless. And ideas were found in other places anyway…

I wrote a pirate story for Dead Duck and Zombie Chick. I guess I wanted to do something a little more conventional than I had with past stories (unless you consider cow gods, a funeral for an 80's action figure and The Canadian Mafia conventional). It seems like every other popular cartoon character has dealt with pirates, and I wanted to see what my guys would do with 'em. Besides, the stories that follow it are as unconventional as any of written thus far. 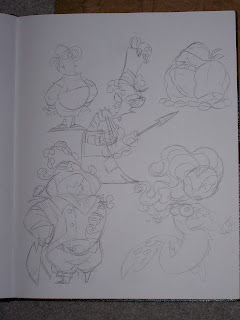 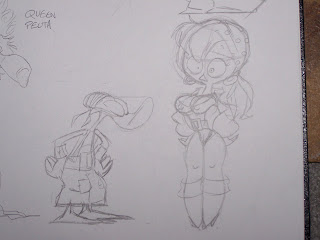 This is a page out of my sketchbook where I worked up some pirate designs. I'm not one to fret and fuss with preliminary designs, and usually when I put something on paper, that's exactly how it's going to look in the finished product. That's how this went. Each of these pirates turned up as-is in the story. The pirate with his torso chewed out served as Captain, and the buxom and toothy mermaid to his right did the chewing. And this is almost exactly what Dead Duck and Zombie Chick look like in the finished story, except I gave Dead Duck a swash instead of a belt. In every other story I've had these two wearing their usual black outfits, but for this, I just really thought it'd be fun to draw them as pirates. Plus I think Zombie Chick looks hot this way. So sue me. 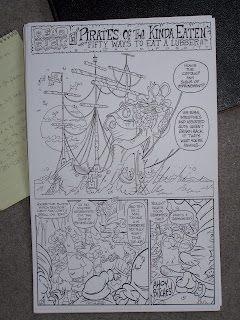 This is the first page of the story. I really did research pirate ships, and I probably could have drawn something right out of "Mutiny On The Bounty" if I had to. But really, where's the fun in that? I'm a cartoonist, not a pirate ship engineer. So using the typical pirate ship frame, I built off that and created something you might see in a Betty Boop Cartoon. It actually took several sketches to reach this cartoony conclusion. Some of the faces I drew on the ship originally were much more horrific. The female on the ship's front was a last minute idea, which I liked, but worried that it could conflict with the other mermaid. In the end, I think they're different enough to exist together. The other thing that had me stymied was the title of this story. I like parody titles, and this one was a real bitch to come up with. I've no doubt there are better possibilities that I could have used, but ultimately this worked for me just fine.

The next story I worked on was one I'd had in my head since last 2006 when I began working on Dead Duck. All I knew going in was that it was going to be about Dead Duck picking up a dead Rabbi having to find something to do with the Rabbi's abandoned golem (read up on your Jewish lore if you don't know what I'm talking about). This sketch dates back to fall of '06, and is based off a robot I'd drawn for my old "Hodge Podge" comic strip from 1996. 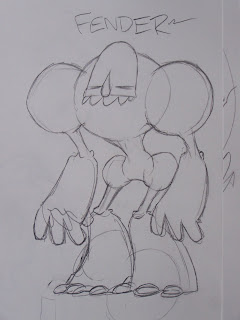 The golem story kept getting pushed back for other stories until recently, when I knew I was getting towards the end of the book and wanted to make sure I got to include the golem tale. So I began doing some more sketches and thinking about the crux of the story. The original idea was that Dead Duck would take the golem, whom I'd named Fenderbaum, or Fender for short, back to Rigormortitropolis and make him a minion because of his ability to speak to the dead (which all golems have). That's when the idea hit me to make this story a little dirty, similar to my old cartoons in various college papers. What if, I thought, the rabbi who died had created a female golem who became his concubine? And what if he died from the crazy golem sex he was having? That's when these sketches came to me: 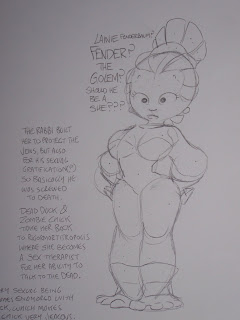 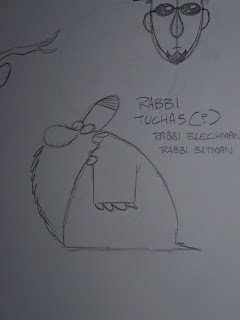 I decided to keep the name Fender for the golem, changing her full name to Lainie Fenderbaum. I did a lot of research into Jewish lore while writing this story, and even came across a documented event in 16th century Prague where an actual Rabbi had done exactly what I'd written, creating the only female golem in history and employing her as his concubine! So I used the Rabbi's name, set the story in 16th century Prague, and the rest of the story came easy! 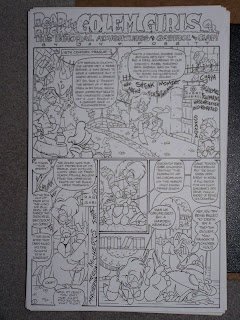 This is the first page of the story. I tried to make sure that this story didn't come across as a parody or insulting representation of the Jews, and I think the research I put into the story helps to assure that. Every word written on the Rabbi's building is an actual Jewish insult reflective of what he was doing with his golem. If you get the chance, look some of them up. It's fascinating stuff. The neighborhood I drew is not necessarily accurate to what Prague looked like in the 16th century. I had researched a famous Jewish cemetery and other landmarks, but in the end, it was just easier to create my own ancient looking neighborhood. I hope I wasn't too far off.

There were two other stories created that I'd prefer not to show here, because they're kind of a big deal in the overall Dead Duck continuity, and I don't want to ruin the surprise. Suffice to say, it's a two-part story, and will be the culmination of the dark origin of Dead Duck, which I've been hinting at in many of these stories thus far.

And now, for my last Dead Duck story. With 27 pages left to fill, I knew I either had to write several small 2-3 page stories or one big one. And like any great performer, I wanted to end things with a bang. So, big story won the toss.

Thanks to my beloved wife Laura, I was introduced to the old TV series Twin Peaks. Now, I don't know if you're familiar with the works of director David Lynch, but the man has the most unique vision ever. You either love his stuff or you hate it, and few people can be said to love everything he's ever done. While I can't say I love his entire body of work, I can easily say I love Twin Peaks. So my final Dead Duck story became a very light homage to the show (These are sketches I did of some potential Chigger Creek townies. Ironically, I don't think I'll be using any of them). 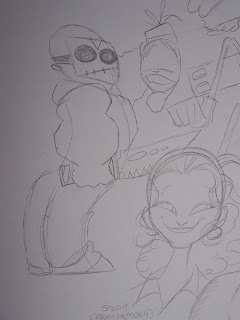 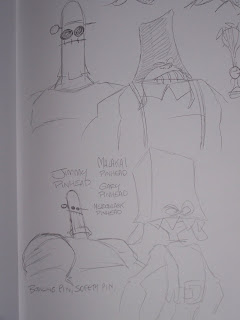 However, the story is NOT by any means a literal parody. In fact, the story consists of ideas and characters I'd developed a good year before I ever saw an episode of Twin Peaks. The tale unfolds in Chigger Creek, a small town I created for my Nova Scotia Cosa Nostra story. I also bring back my character Chum Blockwell, 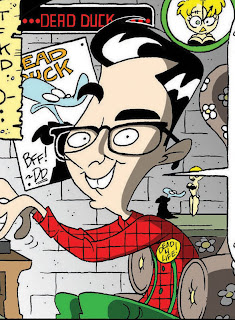 also from my 'Scosh story, as well as narrator for one of the stories I can't show here. Being Canadian, Chum was drawn as a caricature of actor Patrick McKenna's character Harold on The Red Green Show, one of my favorite TV shows. So there's certainly a little red Green flavor to this story as well. My work is always a tapestry of influences that, when put together, are always pure Jay Fosgitt. Distilled, concentrated, and highly combustible when shook up.

And now I have my finished script, all six pages of pure anarchy, waiting to be illustrated. If I can stretch it out to 27 pages, it'll be my longest story in the whole book. If I can't, I have plenty of supplemental material I can include to pad out the rest of the book, a lot of which I've shown you here. But better to have too much space to play in than not enough. And I think this story has all the warmth, weirdness, horror, humor and previously unused ideas that I'd wanted to squeeze in somehow to make it a perfect ending for my Dead Duck graphic novel. I hope you feel the same when you read it.

It only occurs to me now how appropriate it is for me to post this blog today. Being October 7th, it's my birthday, and I just turned 34. And there's nothing in any of my Dead Duck stories that is anywhere as scary as that.
Posted by Unknown at 11:25 AM 9 comments: Links to this post