A couple weeks late with the MSU Comics Forum update, but I had a very nice time! I sold a couple copies of Dead Duck, one of which was purchased by a campus librarian. He has put Dead Duck into the MSU Comic Art Collection, which is one of the largest collections in the country. So Dead Duck now resides on the shelves alongside archived comic collections from all the greats. I'm very honored for Dead Duck to have a permanent home amongst such history! I also took part in a very fun and informal panel discussion with Guy Davis (B.B.R.D.) and Bill Messner Loebs (Writer of The Maxx). They were extremely cool to talk with, and meeting them was the biggest payoff of the whole day for me.

Next Thursday I'm hitching a ride with Katie Cook and her husband Ryan to C2E2, a helluva big comic convention in Chicago. Unlike Wizard World, I won't be manning a table at this shindig. Instead, I'll be pounding the con floor from Friday through Sunday, introducing Dead Duck to new publishers. I have a couple leads, but I really need to bring my A game when showing off Dead Duck (I hate sports, I hate sports analogies, and I'm not even certain what an A game is, but I heard it said once and it seemed to fit). I'm also hoping to rope in some freelance work from various companies, and I have a couple samples I've created to show around. On top of this, I'm just really looking forward to the trip, and soaking in all the atmosphere that radiates at these events. Plus, it's Chicago. And I do so love Chicago. So wish me luck!

Lastly, I'm gearing up for The Motor City Comic Con, my first con appearance since Wizard World last August. Being that it's my only appearance this year where I'll have a table, I'm trying to spruce up my display a bit. So I created this Dead Duck stand-up for my table, which I've dubbed a "DIEorama" (clever or corny, you be the judge). Here's the original uncut artwork. I eventually had to print it in three sections, glue it to foam board and cut it all out, which was tricky. But it'll be worth the effort if it brings a few folks closer to my table on May 14th. 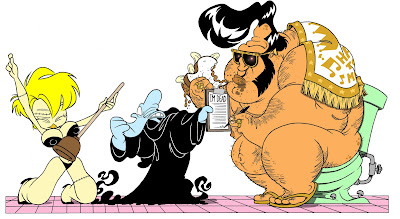 So that's the update. Probably won't post again 'til I get back from Chicago, and if there's no news to tell or, better yet, if certain developments are still working themselves out, it may be even longer. But I will be back. Thanks for listening!