The pessimist within will surely hate me for saying this, but honestly, things are going pretty well right now, artistically speaking. As mentioned in my last post, Interlude Magazine gave me my third assignment, this time illustrating a humorous column about the evolution of technology. I did three cartoons for it, including another cartoon for the Granholm/DeVos story that I was assigned to prior to THIS assignment. All this new work can be seen in Interlude Magazine on July 1st when it hits newsstands. Incidentally, I've discovered that most coffee houses in the tri-cities carry Interlude as well, so if you are a regular at your local javatorium, you may just come across my stuff. Here's a sample of my work for the upcoming issue. It aludes to a bit in the column that forcasts celebrity ice fishing as the next big reality show. 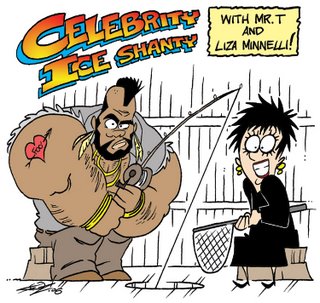 I've also been getting caricature work from unforseen sources lately. I was visiting my birth-mom (as opposed to my adoptive mom) a week or so back, and a client of hers who knew of my work commissioned me to draw a caricature of her parents for their 50th anniversary, with them flanked by their six grandchildren. Long story short, it paid great and turned out very well. Check it out for yourself: 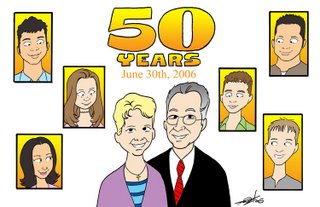 Then late last night I received an e-mail from an employee of Dow Chemical, saying she was looking for a local caricaturist to draw a retirement caricature of someone, and asked me to quote her a price. So I did. By this morning I received another e-mail from her, saying she'd seen my website, really liked my work and was considering having me draw TWO caricatures now. The deal will be closed by this monday and I'm excited to see what I'll be producing.

So that's about it for now. Keep checking back to see what's happening next in the world of the Foz. Seriously, come back frequently. My website needs the traffic and it's gettin' lonely around here.
Posted by Unknown at 9:48 AM 2 comments: Links to this post

A Bit Of News and A Couple Caricatures To Boot...

As I'd mentioned in my last post (which had to have been at least two weeks ago), based off the strength of my previous work for Interlude Magazine, the editor in chief recently gave me a new assignment, which was a lot of fun and somewhat challenging: drawing caricatures of Michigan Governor candidates Jennifer Granholm and Dick DeVos. After much research and trial and error, I felt that I created the best political caricatures of my career. I walked the razor's edge between accuracy and cruelty and ultimately came up with drawings that I felt were worthy of "big time" magazines (I'm still waiting for your call, Rolling Stone). And though the focus of my assignment was to remain entertaining yet unbiased in my representation of the candidates and their platforms, I couldn't help letting a little bias drip into the caricature of whom I considered the opposition. All I'll say here is that Granholm has a couple tiny moles, but DeVos looks like the illegitimate love child of Jimmy Durante and Bert. I've included the dominant caricature so you can judge for yourself. The issue featuring my art should be available to purchase in late July/early August. 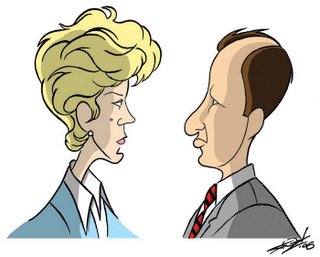 I would also like to take this time to pay tribute to one of my creative partners and best friends of the past six years, Pat Dooley. Pat is heading out to Florida (or, as Homer puts it, "America's wang") at the end of June in pursuit of a career at Disney World. He takes with him half of the magic that brought to life my homegrown movie epic, "Son of Scurvy," and more than half of the fun and humor that our rapidly shrinking gang of friends has possessed all these years. Pat and I have shared many adventures and been a part of many ridiculous creative endeavors, and my imagination is going to be a little lost without him. Hell, I'LL be a little lost without him. So here's to the best of experiences waiting for him at the Magic Kingdom, and to the hopes that he returns home from time to time to help conjur a little of that old magic that we all were once a part of.

And lastly, I've recently been awoken to the obvious notion that actress Julia Stiles is hot and more than caricature-worthy. I found her appealling back when she did "Ten Things I Hate About You," but then lost touch with my infatuation when other sources of drooling overtook my senses (Salma, Halle, you know what I'm talking about). But with her role in the remake of "The Omen" and her face popping up everywhere, I was once again made aware of her "hottitude". With her caricature, I chose to focus on 1. her smile: It's almost like a frown, but with the corners of her mouth just slightly upturned. And her teeth are like big white stalagtites (or is it stalagmites?) that jut out of her mouth, yet somehow manage to look more attractive than awkward. And 2. Her eyes: Julia has natural "puffs" (the less considerate term is "bags") under her eyes, and when she smiles, her eyes form the same shape as her mouth. So all this, coupled with proper hairstyle and such, is what my caricature is comprised of. It should be noted that this finished piece was actually a second draft, the first being much more exaggerated and, dare I say, unnecessarily harsh. She does have a very strong jaw which COULD have been taken further than I took it, and I could have really gone nuts with those teeth. But that just didn't work for me, so I gave it another shot and was far happier with the results. I guess abbrasive exaggeration just isn't my style. I tend to go with more subtle representations I think, at least with women. I take the features that stand out, but I don't overdo them any more than necessary, resulting in a cariture that looks like the subject but is still plenty flattering (I hope). I've drawn the ire of some national (and international) caricaturists because my style tends to heavily deviate from the accepted style that so many others use, but I think what I'm doing is good. I'm more confident and content with my caricatiring than EVER before, and I'm too far along to accept unsolicited criticism from those who opt for cliche over creativity. So at any rate, hope YOU enjoy this caricature of Stiles, at least. 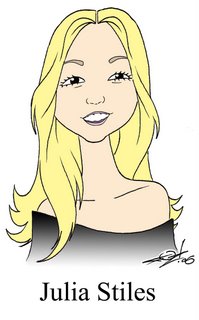 Posted by Unknown at 10:00 AM 2 comments: Links to this post