As my work load gets heavier, these posts may get shorter. But rest assured, I'll do my best to maintain my regular post schedule each Wednesday. And believe me, there's a lot of news coming down the pipeline each week, and you won't want to miss it.

While it's still being discussed, there's a good possibility that folks will see "Bodie Troll" in print earlier than previously reported. It's going to require a helluva lot of work, but it'll all be worth it in the end.

I'm also doing a photo shoot soon, for a Bodie promo that will combine photography and illustration, very similar to what I've previously done with Dead Duck and Zombie Chick. I hope to show that to you soon.

This may also be the last time you see this particular blog. I want to create one with a more general theme, and something that focuses less on "Dead Duck" (much as I love 'em). To anyone who's currently following this blog, I'll let you know when the new one's ready, and hopefully you'll keep on following.

In the meantime, here's another preview image from issue #1. Hopefully you'll be more interested in it than Bodie... 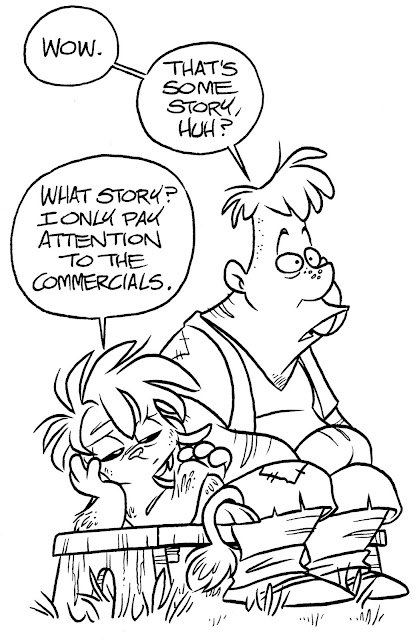 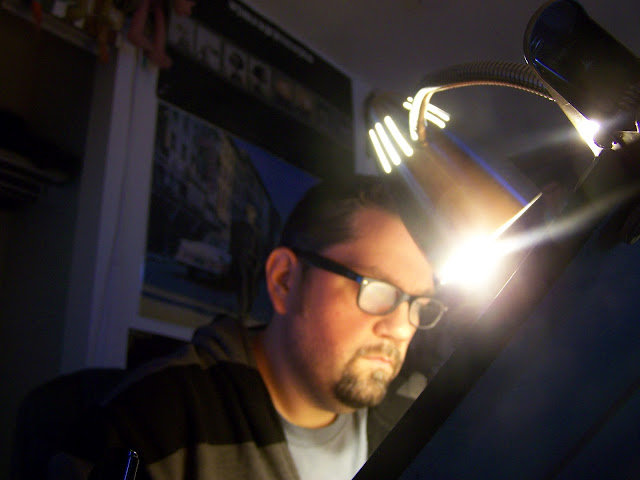 Not much to report this week, other than I'm still plugging away at "Bodie Troll". Below you can see a sample of my rough pencils and finished inks on a recent panel. 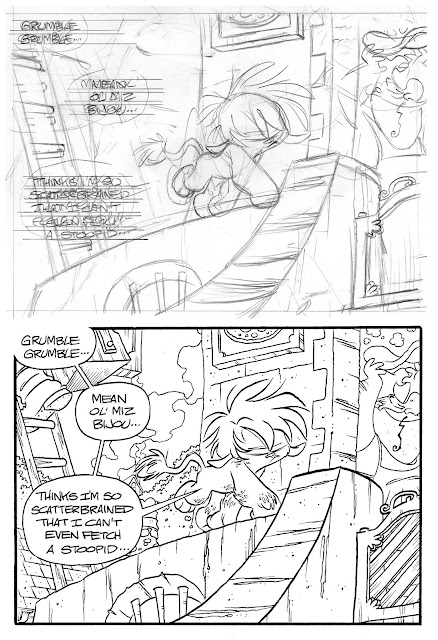 Things seem to be progressing nicely. I'm about half way through drawing the first issue, and then I start on colors. I've recently been experimenting with my digital coloring, and I'm hoping to develop a style that's close to what Evan Shaner did on the first four pages of "Bodie", since I'll be coloring the rest of the series myself. Below is a color test I did on my pencil sketch of Uncle Deadly from "The Muppet Show". I went with choppier brush strokes, employed more highlight and shadow, and overlaid some textures in different parts of the drawing. I like how it turned out, and it's gets me excited to employ this with "Bodie". 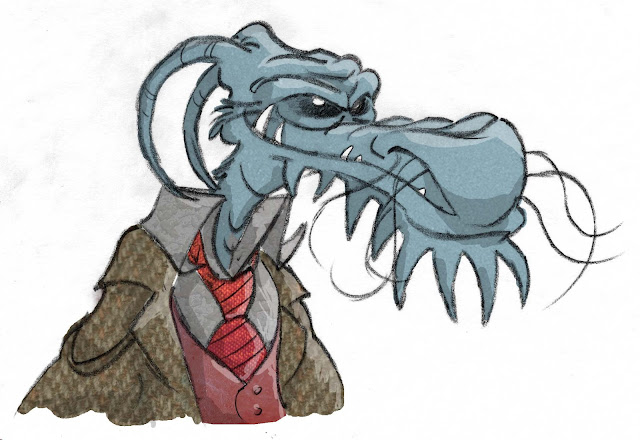 So that about does it for this week. I hope you're all keeping up with "Dead Duck" online. This week continues an episode from Dead Duck's childhood, "Ain't No Time For A Summertime Bruise". There's a big reveal in tomorrow's installment, so if you haven't been following, go back into my archives and catch up. It's not to be missed.

See you next week with more to report!

--Jay
Posted by Unknown at 10:02 AM No comments: Links to this post 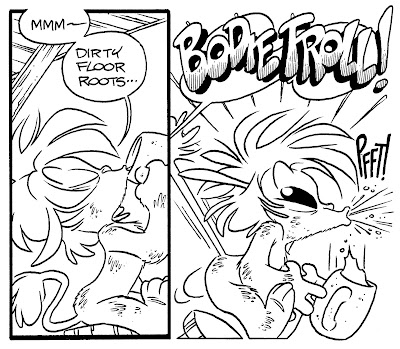 This week has found me blissfully hammering away at my new comic book, "Bodie Troll". I haven't been this happy creating something since working on "Dead Duck". I feel like I'm at a whole other level with "Bodie". My storytelling abilities are stretching and growing, and my art feels like it's going on this wild, kinetic dance that I can't control, and don't want to try to. There's going to be so much to read, see, feel and experience in "Bodie", both for my readers and for myself as I create this. I hope people who enjoyed "Dead Duck", with all its dirty jokes and toilet humor, can appreciate "Bodie Troll" for its sweetness, magic and silliness. Anyway, here's a panel from one of the recent pages to whet your appetite. You should know that Bodie is as ravenous about roots as Wimpy is about hamburgers.

For those of you who are interested, here are some other things that are occupying my interests these days... 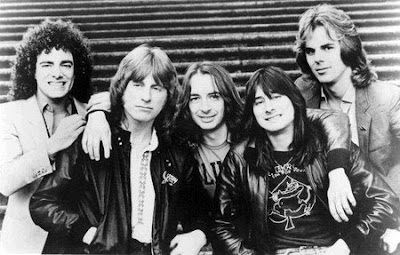 MUSIC: For the past few months, my work days have involved regular listening of "Retroactive Radio: The Best of the 60's, 70's and 80's"--an online radio station out of Muncie, Indiana. It's a free site that plays not only my favorites from those decades, but so many long forgotten gems that even my pop culture knowledge was previously unfamiliar with. Abba, Grand Funk Railroad, Chicago, The BeeGees, Men Without hats, and my favorite, Journey...the list of awesomeness goes on and on. Check them out to brighten your own workday. 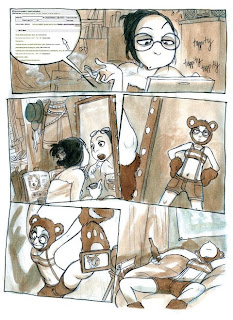 BOOKS: I'm current reading the graphic novel "Koko Be Good" by Jen Wang, published by First Second. I've just started it, but my initial impressions are that it's a young adult "dramedy" with a slight "Scott Pilgrim" vibe (loves me some "Scott Pilgrim"), but far more reality based. A young guy is quitting his job to move to Peru to be with his girlfriend. In the process of moving, he meets a quirky street chick named Koko, and the two cause one another to reflect on who they are and what they want out of life. Were it just for that description, I wouldn't be entirely interested. But the artwork has an animatorly quality to it that piques my interest--fantastic line work, designs and overall layout, though the dialogue and placement of word balloons is a little fragmented and confusing. If it did have the humor and fantasy of "Scott Pilgrim", I might be more sold. But I plan on seeing this through to the end. Here's hoping for a good read. 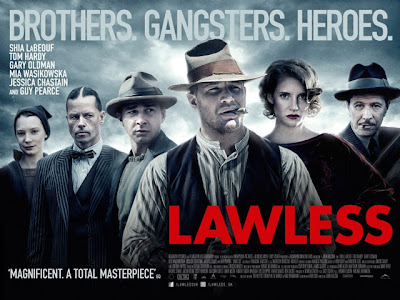 MOVIES: Just saw "Lawless", starring the mediocre Shia LaBeouf, the "holy crap, this guy is deep fried awesome" Tom Hardy, and the equally deep fried Guy Pearce. It's about a family of bootleggers in 1930's Virginia, and their battle with the mob over the liquor trade in their territory. I'm fascinated by gangsters flicks and dust bowl era stories, so that's two checks in the plus column right there. LaBouf isn't nearly as cocky as he normally plays, but Tom Hardy is just balls out genius as the older brother of the bootlegging clan, and Pearce is scary, cold and methodical as the villain. Fists a flyin' and guns a blazin', this movie ain't for the squeamish. But if you like your drama gritty, then this is something worth biting into. My late grandpa's side of the family was in the bootlegging trade in the early 30's, so I felt a kind of connection to the flick on that level, too. Though I doubt my great grandpa did anything so horrific to the opposition as did the bootleggers in "Lawless". Or at least I hope he didn't. 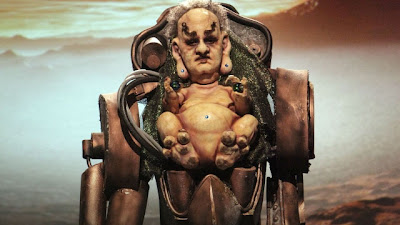 TV: The best TV I've seen lately was actually on the internet. I don't have cable, but thanks to Hulu, I was able to catch the third season premiere of my favorite reality show, "Face Off" (which airs on SyFy)-- where movie makeup artists compete to create painted and prosthetic characters in each episode. It has touches of typical reality show fodder--in-fighting, relationship drama, drawn out reactions from judges to build tension--but the meat of the show is about creating awesome old-school practical make up effects. Catch it if you can. 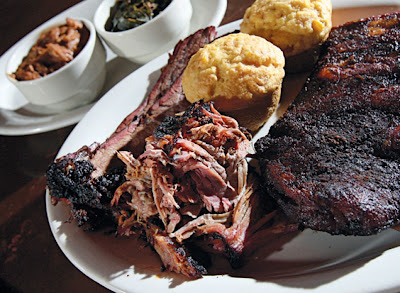 FOOD: I've been enjoying an abundance of grapes, apples and baby carrots lately, which has helped a lot in my weight loss (I've shed 30 pounds in eight months). But it hasn't all been fruits and veggies. Once in a great while I've treated myself, and my new favorite place to splurge is Red Rock Downtown Barbecue in Ypsilanti, MI. It's hands down the best BBQ I've had since moving down to Ann Arbor four years ago. You're given the meat sans sauce, but you can douse the hell out of it with a handful of different sauces at your table, all of which are delicious. I understand Red Rock's can be found in other towns, so find one near you, or come down to Ypsi for some incredible eating.

That does it for this week, kids. Hope the rest of your week is all kinds of cool. Talk to you next time!

AND THE PUBLISHER IS...

This has been a very cool week for me. I just signed my contract, and my new creator-owned, all ages comic book, "Bodie Troll", has locked in its publisher. And now that the ink has dried on my signature, I can comfortably report that the publisher is Red 5 Comics. 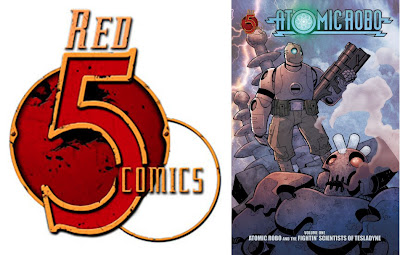 Red 5 has been around for a few years now, and was among the first companies to jump into digital publishing. Among its titles, Red 5 is best known for publishing the popular comic "Atomic Robo", which has had two Eisner Award nominations to date. Red 5 has been nominated twice in the Shuster Awards for best Canadian publisher. A lot of people know how big a Canada-phile I am. So while it wasn't a prerequisite for my publisher to be Canadian, I took it as a good omen that my new publisher was indeed (another of my publishers, Rue Morgue Magazine, is also Canadian).

"Bodie Troll" is slated for release in the fall of 2013. That means I'm going full bore into production as we speak. On the latest page I've drawn, I've designed one of "Bodie Troll's" most important environments, The Drunken Pumpkin tavern. In the preview below, there's a lot of detail, and I haven't added color yet, so hopefully you can distinguish it through all the lines. But believe me, when it's all put together, "Bodie Troll" is going to be something special. 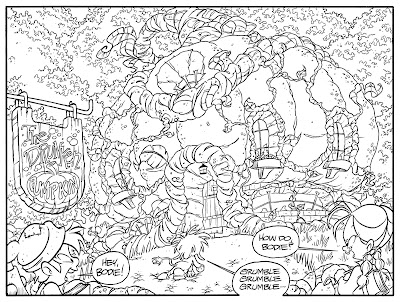 That's it for this installment. See you next week with more news to share!